Tom Hanks:
"'The Pacific' is coming out now, where it represents a war that was of racism and terror. And where it seemed as though the only way to complete one of these battles on one of these small specks of rock in the middle of nowhere was to - I’m sorry - kill them all. And, um, does that sound familiar to what we might be going through today? So it's-- is there anything new under the sun? It seems as if history keeps repeating itself."

I have already mentioned that Vinda (विंदा करंदीकर) did not choose any English philosopher in the list of eight for his book ‘ASHTADARSHANE’ (अष्टदर्शने), 2003.

There I also state the importance of David Hume.

Why was Hume ignored by Vinda?

Here is a possible answer.

"...From Francis Bacon to Nietzsche, Enlightenment thinkers have lauded will over the purposeless life of common humanity. Other animals may live without knowing why, but humans can impress a purpose on their lives. They can raise themselves up from the contingent world and rule over it

There have always been Enlightenment thinkers who do not share this vision. David Hume saw humans as a highly inventive species, but otherwise very like other animals. Through the power of invention they could ease their lot, but they could not overcome it. History was not a tale of progress, but a succession of cycles in which civilisation alternated with barbarism. Hume expected no more than this..." (Straw Dogs: Thoughts on Humans and Other Animals, 2003)

History was not a tale of progress, but a succession of cycles in which civilisation alternated with barbarism.

Marxist / Committed Vinda could have never agreed with this.

This is a great pity because it leaves a large hole in his book. Some one as talented as him should have tried to do justice to Hume in Marathi.

I wonder how long now Hume has to wait.

It may not always be a horse, but history just repeats: 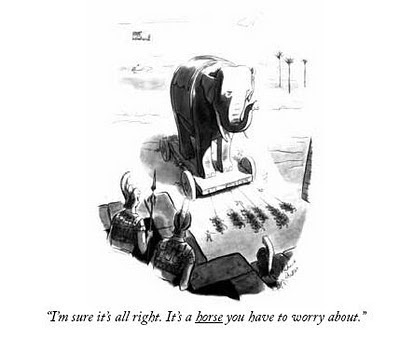