Read more about the event here.

(How can Our Democracy Afford to Provide Third-rate Services to the Poor?)

Well, Sarwate has raised and answered such questions related to Indian democracy from 1947-2009.

In Marathi intellectual world, there is little appreciation of visual arts, let alone that of subtle art of cartooning.

Even the title of this book is biased towards writers and blurbs on the back cover- both Vinda Karandikar विंदा करंदीकर and S P Bhagwat श्री पु भागवत disappointing with their platitudes- don't do any justice to Sarwate's talent. (I know how tender S P Bhagwat gets appreciating B S Mardhekar's बा सी मर्ढेकर poetry.)

Why don't these guys remember Ajanta or Halebidu or Jagte Raho or The Simpsons watching Sarwate's pictures?

A O Scott observes: "...I have long been of the opinion that the entire history of American popular culture — maybe even of Western civilization — amounts to little more than a long prelude to “The Simpsons.”"

Clearly a new paradigm needs to emerge in Marathi criticism to fully appreciate the art of Vasant Sarwate.

In a masterly essay on James Thurber, Paul Johnson writes: "...A score of his published cartoons are masterly, and five in the highest class in history. When I contemplate them, I sometimes feel that after a lifetime of studying and practising art, I know nothing about it..."

Surely, I know nothing about it but I hope Sarwate soon gets his own Paul Johnson. 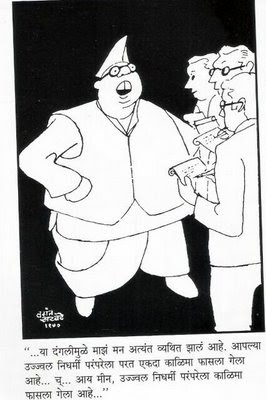