Steve Jobs- from Bazzar to Cathedral, from Kabir to Michelangelo

"Kabir's a disruptive voice which stands in opposition to everything you cherish and hold dear, from your worldly possessions to religious beliefs. Kabir might not have been a nice man to know..."

"Jeffrey Sachs's diagnosis of America's ills understates the deleterious effect of globalisation. He doesn't question the economics or morality of offshoring American production abroad, regardless of its consequences for American jobs or real wages, simply saying that the winners should compensate the losers. Not only has this not happened, but it is increasingly unlikely to happen, because globalisation has greatly increased the political clout of the winners. Since the 1980s owners of capital have enjoyed not just a big rise in pre-tax earnings, but a substantial cut in tax rates, taking inequality back to levels last seen before the first world war."

"Apple’s rise to power in our time directly paralleled the transformation of global manufacturing. As recently as 10 years ago Apple’s computers were assembled in the United States, but today they are built in southern China under appalling labor conditions. Apple, like the vast majority of the electronics industry, skirts labor laws by subcontracting all its manufacturing to companies like Foxconn, a firm made infamous for suicides at its plants, a worker dying after working a 34-hour shift, widespread beatings, and a willingness to do whatever it takes to meet high quotas set by tech companies like Apple...

...Mr. Jobs’s magic has its costs. We can admire the design perfection and business acumen while acknowledging the truth: with Apple’s immense resources at his command he could have revolutionized the industry to make devices more humanely and more openly, and chose not to. If we view him unsparingly, without nostalgia, we would see a great man whose genius in design, showmanship and stewardship of the tech world will not be seen again in our lifetime. We would also see a man who in the end failed to “think different,” in the deepest way, about the human needs of both his users and his workers. "

"Some 130 years after Edison’s remarkable creation of the electricity system, there still remains no doubt about the fundamental and truly epochal nature of his contributions: the world without electricity has become unimaginable. I bet that 130 years from now our successors will not be able to say the same about Apple’s sleek electronic devices assembled from somebody else’s components and providing services that are not fundamentally different from those offered by competitors. I have no doubt that the world without iPhone or iPad would be perfectly fine."

"This is the generation (born between 1955 and 1985), which has bequeathed to the world reality television, the cult of the celebrity, first-person confessional journalism and the mass hysterical emoting at the funerals of people they have never met, let alone known. I suppose, if we were to grope for a reason, we might say that it was the first generation for a very long time which lived without the depredations of war and thus the prospect of imminent death; which threw off the notion of a higher authority than itself and was schooled in the art of self-expression rather than the acquisition of knowledge."

I have already thanked Mr. Jobs for PC with GUI and 'Toy Story'. That apart, what kind of change, if any, Mr. Jobs brought to our lives?

To begin with, reading Mr. Liddle's words above and Mr. Job's own thoughts- quoted in previous post- on death, he made us think about 'the prospect of imminent death' at least for a day.

Let us now turn to materialistic aspects of change.

"The economic decoupling of computers from everything else leads to more questions than answers, and barely hints at the strange future where today’s trends simply continue. Would supercomputers become powerful engines for the miraculous creation of wholly new forms of economic value, or would they simply become powerful weapons for reshuffling existing structures — for Nature, red in tooth and claw? More simply, how does one measure the difference between progress and mere change? How much is there of each?"

Mr. Thiel's article should really be an eye-opener for many.

David Brooks says: "A person born in 1900 began with horse-drawn buggies and died with men walking on the Moon..."

All my grandparents (and my wife's) were borne around 1900 and had that ride but for my generation it has been far less exciting.

I feel most of what Mr. Jobs did since his return to Apple was 'mere change'. And that's why I find it ridiculous when people compare him to Thomas Alva Edison.

I have expressed on this blog my increasing inability to connect to young strangers, or even not so strangers, in urban India because their ears are always stuffed.

And I hold Mr. Jobs partly responsible for this.

"...Michael Bull draws on the “cultural theory” of Horkheimer and Adorno to argue that, thanks to the iPod, urban space has in many ways ceased to be public space and has become fragmented and privatized, each person retreating into his own inviolable sphere and losing his dependency upon and interest in his fellows. This process not only alienates people from each other, it enables people to retain control over their sensations, and so shut out the world of chance, risk, and change..."

What made Mr. Jobs?

"...Look at the Steve Jobs obituaries. Over the course of his life, he combined three asynchronous idea spaces — the counterculture of the 1960s, the culture of early computer geeks and the culture of corporate America. There was LSD, “The Whole Earth Catalogue” and spiritual exploration in India. There were also nerdy hours devoted to trying to build a box to make free phone calls...The roots of great innovation are never just in the technology itself. They are always in the wider historical context. They require new ways of seeing..."

The counterculture. Do we have it today?

Susan Sontag said: We live in a culture committed to unifying greeds…..everyone on the planet feeding at the same trough of standardized entertainment and fantasies of eros and violence….How one wishes that some of its (the iconoclastic spirit of the 1960s) boldness, its optimism, its disdain for commerce had survived……

Here is one of us trying rather pathetically to 'escape' our culture... 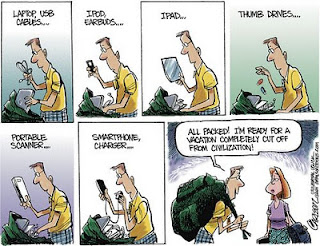 I read Mr. N R Narayana Murthy has called Mr. Jobs “Michelangelo of the computer era”. It made me chuckle.

I associate Michelangelo with a cathedral and I once saw in Mr. Jobs iconoclastic Kabir who is associated with bazaar, far away from a cathedral.
Posted by Aniruddha G. Kulkarni at 9:00 AM No comments: