Waiting for an Indian Cellphone Novel

“Until recently, cellphone novels — composed on phone keypads by young women wielding dexterous thumbs and read by fans on their tiny screens — had been dismissed in Japan as a subgenre unworthy of the country that gave the world its first novel, “The Tale of Genji,” a millennium ago. Then last month, the year-end best-seller tally showed that cellphone novels, republished in book form, have not only infiltrated the mainstream but have come to dominate it.

Of last year’s 10 best-selling novels, five were originally cellphone novels, mostly love stories written in the short sentences characteristic of text messaging but containing little of the plotting or character development found in traditional novels. What is more, the top three spots were occupied by first-time cellphone novelists, touching off debates in the news media and blogosphere.

“Will cellphone novels kill ‘the author’?” a famous literary journal, Bungaku-kai, asked on the cover of its January issue. Fans praised the novels as a new literary genre created and consumed by a generation whose reading habits had consisted mostly of manga, or comic books. Critics said the dominance of cellphone novels, with their poor literary quality, would hasten the decline of Japanese literature.
Whatever their literary talents, cellphone novelists are racking up the kind of sales that most more experienced, traditional novelists can only dream of…

… The cellphone novel was born in 2000 after a home-page-making Web site, Maho no i-rando, realized that many users were writing novels on their blogs; it tinkered with its software to allow users to upload works in progress and readers to comment, creating the serialized cellphone novel. But the number of users uploading novels began booming only two to three years ago, and the number of novels listed on the site reached one million last month, according to Maho no i-rando. ..”

Job of a cellphone novelist is hazardous because writing on the device makes nail to cut into the flesh, sometimes bloodying it. See a related post here.

I hope India too will soon see a cellphone novel.

Indian cities have the entire infrastructure in place. Youngsters have evolved a lingo to suit the medium. They use their thumbs ambidextrously on the gadgets. They probably first express what they feel using SMS rather than ordinary speech.

Hopefully they have something interesting to say other than just: 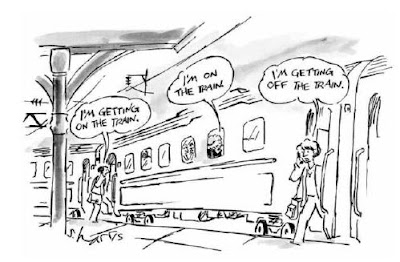 Artist: Sidney Harris The New Yorker 13 November 2000
Posted by Aniruddha G. Kulkarni at 8:30 AM No comments: Links to this post