The Kama Sutra: It's NOT for me but have Blairs read it?

William Leith's review of Oliver James's 'Affluenza: How to Be Successful and Stay Sane':

"...One of the scariest parts of the book is James's analysis of New Labour politicians. Have they been infected with the virus (of Affluenza)? Well, just think of Tony Blair and his property dealings, his flash holidays, his spray-on tan. Think of Peter Mandelson, who said: "We are seriously relaxed about people becoming very, very rich." Think of Prescott. Think of Cherie Blair...
"Just as Aids is stalking the globe, so is the Affluenza virus," says James. I think he's right..."

"The emphasis on the physical postures of yoga may have been bolstered by the sensational publication, in 1883, of Sir Richard Burton’s English translation of the Kamasutra, a text that became notorious for its “positions”. The tendency to confuse the teachings of yoga and the Kamasutra may have led to the overemphasis on the “positions” in both, since yoga was always associated with sex in India and came to be eroticized in England, and the general English and Indian ignorance of the cultural content of the Kamasutra was matched by their ignorance of the philosophical content of (classical) yoga. Both yoga and the Kamasutra served the schizophrenic Victorian combination of public condemnation of sex and private obsession with it..."

Sam Jordison has written a review-
easily one of the funniest prose pieces I have read- of it for Guardian, Feb 14 2011:

"...Don't think you escape either, girls:

"Sprinkle a mixture of powdered milkweed thorns, hogweed, monkey's shit and root of glory lily on a woman. She will not want sex with anyone else."

Meanwhile, beware of the man who's taken another nugget of advice from the book and approaches you with his penis covered in the powder of "a kite that has died of natural causes, mixed with honey and gooseberries". He intends to bewitch you!

All of the above is taken from the new Penguin edition of the book that's generally held up as the last word in ancient wisdom about sack-play: The Kama Sutra. It's further confirmation of my belief that the wisdom of the ancients is most generally to be ignored. After all, most of human endeavour in the past 2,000 years has been dedicated to escaping such stuff and similar wisdom about flatness of the earth, the importance of blood draining, the way fire is powered by lignin, and a man who trotted around Galilee claiming to be able to cast out demons..."

Bart Simpson once tells Homer Simpson: "Oh, dad. Nobody can rationalize like you." (Season 17, Episode 20, 'Regarding Margie')

I would say the same to Tony Blair. Therefore, I would also hire him as a salesman. He would best his sales target every quarter.

They say a good sales person is the right combination of empathy and ego-drive.

Reading what is quoted below, looks like Tony Blair has another prominent 'drive'.

"...Former British Premier Tony Blair’s wife Cherie has lifted the lid on her sex life, saying that her husband “still excites me in all possible ways”.

“We’ve been married 31 years and known each other 35 and even now he still excites me in all possible ways,” the Sun tabloid quoted the 56-year-old mother-of-four as saying in an interview with a magazine.

Cherie, a Queen’s Counsel, giggled when asked how the couple spend their time when the former Prime Minister returns from his trips as envoy to West Asia.

Tony, 57, once joked he could make love “at least five times a night” and the couple also claim to be members of the mile high club. Last year, Tony revealed in his memoirs how he “devoured Cherie’s love” the night before he became Labour leader in 1994.He wrote: “I was an animal following my instinct.”

Cherie had son Leo, who is now 10, when she was 45 and living in Downing Street.She later revealed the pair conceived the child on an official stay at Balmoral in Scotland as it’s embarrassing to bring contraceptive “equipment” for the castle, where servants unpack wash bags.

But Cherie admitted some things have changed over the years.

Recalling watching the fireworks after the 1981 Royal Wedding, she said her husband lifted her on to his shoulders adding, “He couldn’t do that now. He would probably collapse.”" 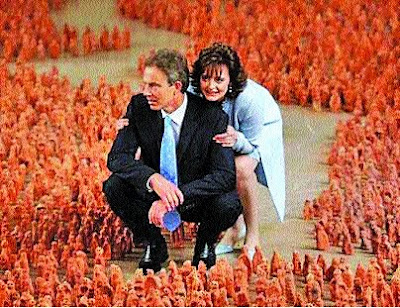 Does The Kama Sutra describe a 'position' where a woman climbs on to a man's shoulder?
Picture courtesy: The Asian Age, March 19 2011

By the way, I have never even thought of lifting my wife or fantasised lifting any other woman on my shoulders!

My body is too weak for it. But on the positive side, I feel, I don't suffer from 'Affluenza'.

"...So why are we, in James's words, so fucked up? It's because of what James calls Selfish Capitalism, or, more catchily, "Affluenza", a virus-like condition that spreads through affluent countries. In these countries, notably English-speaking ones, people define themselves by how much money they make. They are also ruled by superficial values - how attractive they look, how famous they are, how much they are able to show off. As the sociologist Erich Fromm would have put it, we have moved from a state of "being" to a state of "having". Now we are obsessed with what other people think of us, and we've lost touch with our own feelings..."
Posted by Aniruddha G. Kulkarni at 9:00 AM 2 comments: