For my taste, M F Husain is an average artist. His art has never inspired me.

But then I read Durga Bhagwat (दुर्गा भागवत).

The late Ms. Bhagwat all her life defended freedom of expression, fearlessly took on Indira Gandhi during the Emergency when most intellectuals were shit-scared and fought culture-vultures turned goons of Maharashtra while defending Marathi author Bhau Padhye (भाऊ पाध्ये) who was accused of obscenity.

“…why does Husain draw Seeta sitting on the tail of Lord Maruti flying across the sky? And that too naked one? Obviously religious people will get angry, won’t they? Basically Husain has not read Ramayana is obvious because no where in Ramayana, Maruti carries Seeta. In Ashok-vana, he offers Seeta that he would transport her on his shoulder safely. Seeta declines the offer because she wants Rama to go there personally, slay Ravana and free her. That shows Seeta’s confidence in Rama and also pride. Without considering this context, drawing revealing pictures of Hindu goddesses has to be considered objectionable. Such pictures are naturally going to hurt the sentiments of religious people. Not just that even a religious Muslim may not like this insult of gods of other religions.”

"...Now that M.F. Husain has settled in Qatar where there is total freedom, he is free of the shackles imposed by the Indian system on freedom of expression. All those who appreciate his art would now eagerly await his imaginative paintings of the leaders of Qatari society, hopefully not artistically clothed.

His fans would not expect him to confine nudity to Hindu deities alone; it would extend to all the religions. Having already painted his mother, daughter and Muslim kings fully robed, Mr Husain, being the freed citizen that he is now in Qatar, should be prepared to remove those clothes. How can the artist in him be satisfied with seeing Saraswati and Parvati alone in the nude?..." 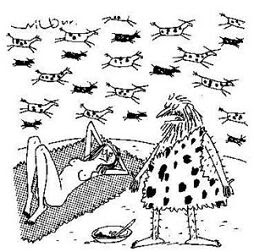 'It’s all very well you saying I should paint something else, but WHAT?’


courtesy: Spectator
Posted by Aniruddha G. Kulkarni at 9:00 AM No comments: