“What vexed Miller were the stories Americans have told themselves about the power of positive thinking, the instant money and spiritual purity that are sure to follow from unfettered entrepreneurship, the decency of the profit motive, the goodness of the national past, and, when all else fails, the possibility of escape and reinvention in the West. This land is your land: Henry David Thoreau crosses uneasily with Norman Rockwell; the tenets of Ayn Rand crash into the gospel of Jesus Christ; the Book of Mormon reads strangely in parallel with the Bill of Rights; Huckleberry Finn lights out for the territory but never becomes the Marlboro Man, exactly. Above all, Miller responded to a culture that cherished a sanctimonious and noxiously sentimental vision of family life as a beacon of health and wealth.”

“The most famous suicide in American theater is that of Willy Loman, in Death of a Salesman (1949). Exhausted by years on the road, his mind going, Willy is suitably beaten down by heartless business forces, so that his killing himself is at once supremely pitiable and supremely noble: He fakes a car accident so his widow and sons can collect the $20,000 insurance payout. Willy's wife admonishes her sons, who despise their father's doddering and weakness and failure, "But he's a human being, and a terrible thing is happening to him. So attention must be paid." Miller's attention is fixed on larger concerns than the fate of one man. For him, the universal tragedy of American life is the fundamental capitalist insistence that business is business. That's exactly what Willy's boss says as he's firing him; Willy agrees reflexively, but then goes on to qualify and plead. The truth is incontestable nevertheless: If you can't make a killing you get murdered.”

(INTERVIEWER People often come out of Death of a Salesman crying. If you said to them that you’d watched them laughing while in their seats, they would deny it. And yet humor is part of it, isn’t it?)
"The whole thing is very sad, but the fact is I did a lot of laughing when I was writing the play because some of Willy Loman’s ideas are so absurd and self-contradictory that you have to laugh about them; the audience in fact does, but they don’t remember it, thank God! If they remembered it, they wouldn’t be as moved as they are. Basically, it’s the laughter of recognition, I believe." 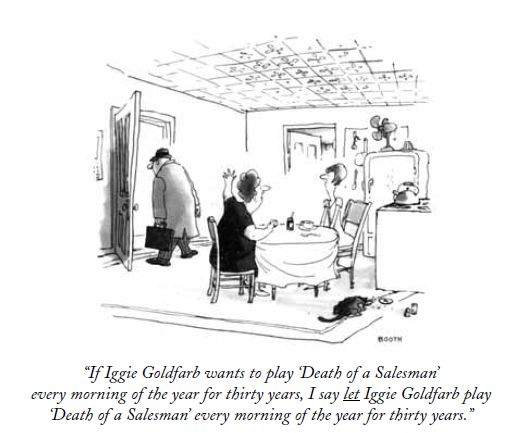 Artist: George Booth, The New Yorker, December 2 1972
Posted by Aniruddha G. Kulkarni at 8:00 AM No comments: