"...In a surprising move that takes the American hunt for hidden money beyond the usual Swiss and Caribbean tax havens, the US Justice department's civil tax division asked a Federal Courts permission to force the London-based HSBC Bank to disclose names of thousands of wealthy Indian-American clients who it says maintain accounts with more than $ 100,000 in the banks India branches ostensibly to hide it from the IRS taxman.

In a 47-page statement filed before a San Francisco court, the IRS said there were 9,000 US residents of Indian-origin who had $100,000-minimum-balance accounts at HSBC India but that fewer than 1,400 had disclosed existence of their accounts."

Mind you, they didn't go to Switzerland or Caribbean. They came to their mother-land.

In the past couple of weeks, many of those 7600 (84.4%), cheered Indian team's triumph in ODI cricket WC and Anna Hazare's victory in his fight with corruption. Some of them even went on a symbolic fast. 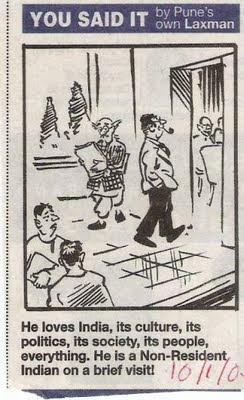