Barbie Defaults on Her Mortgage for Docking Station 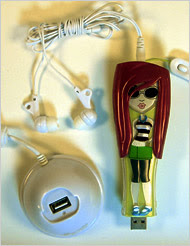 LOUISE STORY’s “Barbie Gets Another Accessory: An MP3 Player and More Stuff on Her Web Site” (NYT July 23, 2007) announces: “…Barbie has a docking station.”

Can she hang on to it in these times of “sub-prime crisis”?


D Murali says in Business Line (August 19, 2007):”…. Now, what are the lessons from the crisis? This sub-prime mess raises two very important issues. One, the way banks lend money willy-nilly to people without properly checking their credentials; and two, the absolutely pathetic rating process used by the rating agencies. While both are hazardous to the system, the latter raises issues of moral hazard because the rating agencies profited massively from rating these residential mortgage backed securities.”

Allan Sloan:: “…..It’s really amazing: Most of the loans to substandard creditors borrowing 100 percent of the purchase price of homes they couldn’t afford were rated the same as GE and the federal government. That makes no sense. But the money rolled in, and Wall Street — by which I mean the world’s biggest and most important financial institutions — didn’t care about the real world or ask any questions. It was too busy making money, and cashing bonus checks generated by subprime-mortgage profits…..”

Don’t we all know how banks in India have pestered us for last few years to take any loan from them?

Poor Barbie. She was tempted to take the loan for her brand new docking station. Now she finds barbarians at the gate to repossess her new asset! 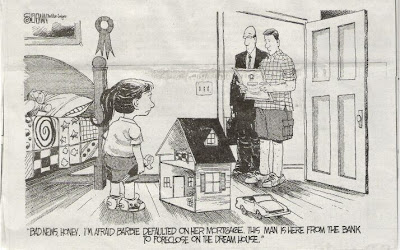 "BAD NEWS, HONEY, I'M AFRAID BARBIE DEFAULTED ON HER MORTGAGE. THIS MAN IS HERE FROM THE BANK TO FORECLOSE ON THE DREAM HOUSE"