The late Durga Bhagwat दुर्गा भागवत rates R D Karve र धो कर्वे next only to Mahatma Gandhi. She does it for his spearheading of important "family planning" movement in India.

Visit for my take on Karve's work here.

I have said elsewhere on this blog how we Indians are so poor at preserving our history. Even the history of 19-20th century, let alone the earlier one.

On January 13, 2008 Washington Post reviewed a "cluster of smartly designed, comprehensive reprints of vintage comics, going all the way back to the beginning of the 20th century -- and, in one notable case, earlier."

In Maharashtra, I have rarely seen such reprints in recent times.

Now comes Padmagandha Prakashan's पद्मगंधा प्रकाशन project to reprint the entire work of R D Karve. It is slated for a release on March 15, 2008. 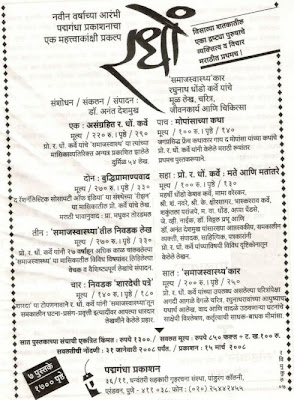 source: Lalit ललित January 2008
Posted by Aniruddha G. Kulkarni at 11:42 AM 2 comments: Links to this post