How can Our Democracy Afford to Provide Third-rate Services to the Poor?

“…all Indians who are not nanga or bhookha are—and have been—complicit in complex and historical ways with the cruel cultural and economic systems that make Indian society so cruel, so vulgarly unequal…”

“…the neglect of basic education and healthcare which, as well as being scandalous in its own right, deprives India of the fit and literate workforce any competitive industry requires. Mao Zedong, for all the reckless horror he unleashed, did bring schools and rudimentary healthcare to the peasants. “The train of China’s industrialisation runs on the secure foundation of Maoist rails,” says Prof Sen. If India is to become a car-owning democracy, it will have to solve some basic problems first. “

Now many Indians want to hold only their “government” responsible for this so that they can continue to party.

“…When patients die in government hospitals because of adulterated medicines, government and civil society look at them coldly because of the contempt for human life. When homeless poor die in summer and winter, children die only because of lack of access to clean water, they don’t become scandals for our civil society. Therefore, we assign the question of homeless, support-less, old, physically challenged to either a joint family or an invisible system called ‘government’…” 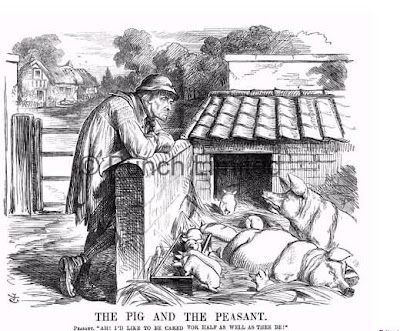 Peasant. 'Ah! I'd like to be cared vor half as well as thee be!'

Artist: John Tenniel,'The Pig and the Peasant' Punch 9 September 1863
Posted by Aniruddha G. Kulkarni at 9:00 AM No comments: