Out in My Old Town Love Canoe

In the end, though, it's difficult to go along with Wolf's central contention, which is that women can only harness their creativity when in a fulfilled sexual relationship – a thesis based largely, it seems, on a reading of Edith Wharton and George Eliot, and the relationship of Georgia O'Keeffe with Alfred Stieglitz. Her evidence is crudely selective, and strangely unimaginative. Hasn't it ever occurred to her that, sometimes, happiness writes white? Didn't she wonder about the sex lives of art's great spinsters? But it's also, I think, an unhappily reductive way of looking at the world. Sex is a huge part of life. But it's not everything, and we do ourselves a disservice if we try to suggest otherwise.

In middle class culture of  Maharashtra, water for recreational purpose is almost absent. Reasons are not hard to figure: Hardly any perennial lakes and rivers.

Contrast that with gardens built by the Mughals in the Islamic style of architecture. Two of their most important features are running water and a pool to reflect the beauties of sky and garden. No Yamuna river, no Taj Mahal perhaps.

When water, canoe, man, woman, moon come together in the night, they mean  romance and its occasional delightful expression such as in the picture below. 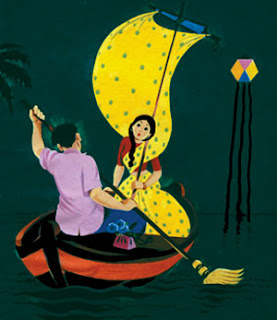 I said romance but not sex.

"Before the youth of America fooled around at drive-ins and necked on Lover’s Lane, they coupled in canoes. Boatloads of them. In the early 1900s, canoes offered randy young guys and gals a means of escape to a semi-private setting, away from the prying eyes of their pious Victorian chaperones...

...As further proof that canoeing had become a hotbed for teenage delinquents, in 1913 the Minneapolis Parks Board refused to issue permits for canoes with unpalatable names. Local newspapers published some of the offensive phrases that slipped past the board the previous summer, including “Thehelusa,” “Kumomin Kid,” “Kismekwik,” “Damfino,” “Ilgetu,” “Aw-kom-in,” “G-I-Lov-U,” “Skwizmtyt,” “Ildaryoo,” “Win-kat-us,” “O-U-Q-T,” “What the?,” “Joy-tub,” “Cupid’s Nest,” and “I Would Like to Try It.” The commissioners unanimously agreed to outlaw phrases lacking obvious moral and grammatical standards, though a few of these clever pre-text-message abbreviations clearly had them scratching their heads...

...But this floating, petting paradise would not last. “When motorcars became more available in the early ’20s, courting in canoes sort of fell off,” says (Roger) Young. “Guys were getting into their Model Ts or Model As and going off with girls for a Sunday drive instead of canoeing.” And what went on in the backseats of those cars? Well, that’s a whole different story."

Following picture too has water, canoe, man, woman, moon together. But the desires are less poetic and more carnal than in the picture above! 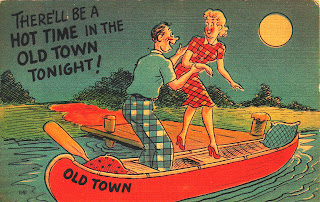 A comic postcard advertising Old Town Canoes makes an open joke of their preferred use.

Go back to Phadnis's picture above. I can't imagine man and woman  in that canoe making out little latter. I feel even suggestion of sex will spoil that mood. But then maybe I am now old.
Posted by Aniruddha G. Kulkarni at 9:00 AM No comments: Links to this post