I recently learned one more time how poorly most of us are taught at school.

We were told (I forget the year) that Lord William Bentinck​ achieved the suppression of the thugs but no one told us, certainly not the text book, who exactly thugs were.

I thought they were like dacoits, like mythical Valya-koli (वाल्या कोळी): they stopped you in your track, robbed you and killed you.

I realized how wrong I was when I started reading Mike Dash's book 'Thug: The True Story Of India's Murderous Cult', 2005.

"....Any skilful party might have had three or four affairs a night without anyone being any the wiser for it. People knew not what Thuggee was, nor what kind of people Thugs were. Travellers were frequently reported to have been murdered by robbers, but people thought the robbers must be in the jungles; and never dreamed that they were murdered by the men they saw every day about them.

From the interrogation of Hurree Singh by William Sleeman, 1835..."

Thugs were the men you saw every day about you...Dash's book starts with a harrowing tell of the murder of an entire upper middle-class traveling family by the people who have been traveling with them and then leaving no trace whatsoever of their crime behind...quite chilling... 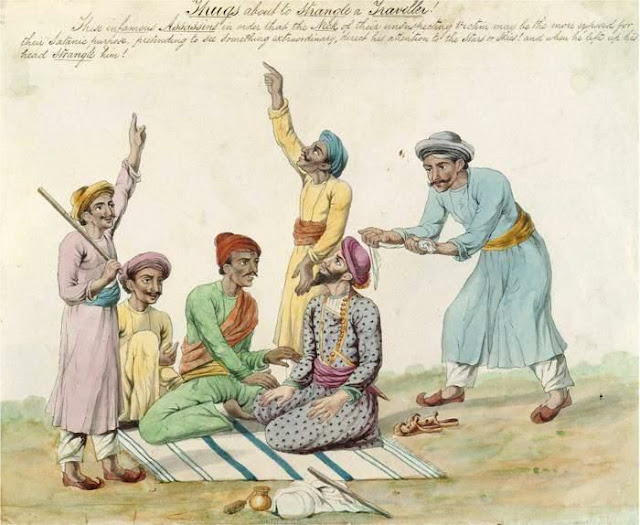 'Thug inveiglers induce an intended victim to bare his neck by pointing to the stars.', 1837

Artist: Unknown Indian artist at Lucknow
Posted by Aniruddha G. Kulkarni at 9:00 AM No comments: Links to this post