...In the five years since the bet was made, a clear winner did emerge, but it was neither blogs nor the Times.

Wikipedia, which was only one year old in 2002, ranks higher today on four of the five [top] news stories [of 2007]: 12th for Chinese exports, fifth for oil prices, first for the Iraq war, fourth for the mortgage crisis and first for the Virginia Tech killings..."

”… Wikipedia's promise is nothing less than the liberation of human knowledge—both by incorporating all of it through the collaborative process, and by freely sharing it with everybody who has access to the internet. This is a radically popular idea.

Wikipedia's English-language version doubled in size last year and now has over 1m articles. By this measure, it is almost 12 times larger than the print version of the Encyclopaedia Britannica. Taking in the other 200-odd languages in which it is published, Wikipedia has more than 3m articles. Over 100,000 people all over the world have contributed, with a total of almost 4m “edits” between them.

Wikipedia already has more “visitors” than the online New York Times, CNN and other mainstream sites. It has become a vital research tool for huge numbers of people. And Wikipedia is only five years old.

This success has made Wikipedia the most famous example of a wider wiki phenomenon. Wikis are web pages that allow anybody who is allowed to log into them to change them. In Wikipedia's case, that happens to be anybody at all. The word “wiki” comes from the Hawaiian word for “quick”, but also stands for “what I know is...”. Wikis are thus the purest form of participatory creativity and intellectual sharing, and represent “a socialisation of expertise”, as David Weinberger, who is currently writing a book on collaborative intelligence, puts it…”

His reputation is based on his unique creation - a 23-volume encyclopedia in Marathi, called Maharashtreeya Dnyankosh महाराष्ट्रीय ज्ञानकोश. His work received no government funding and took 12 years of his life eventually killing his diabetic body.

He reminds me of great Don Quixote. We may all laugh at Don but we envy him deep down, for his capacity to dream and incessant efforts he puts in to pursue those dreams, against impossible odds.

Phadke’s article informed me most. Shejwalkar's brought tears to my eyes.

Phadke argued that Ketkar shouldn’t have undertaken this project. He thought Ketkar was a very promising sociologist and should have stuck to his core skill. By doing so, he would have contributed more to India’s intellectual progress.

As Phadke demonstrated in his article, Ketkar was a highly opinionated person. He wasn’t ready to listen to any expert, let alone revising his work based on their views.

You can’t compile encyclopedia with this attitude.

“…Among the new media, wikis are the perfect complement to blogs. Whereas blogs contain the unedited, opinionated voice of one person, wikis explicitly and literally allow groups of people to get on the proverbial “same page”…”

Ketkar wasn’t ready to get on the same page with anyone who didn’t agree with him, he didn’t believe in collaborative intelligence!

Ketkar says to all of us: 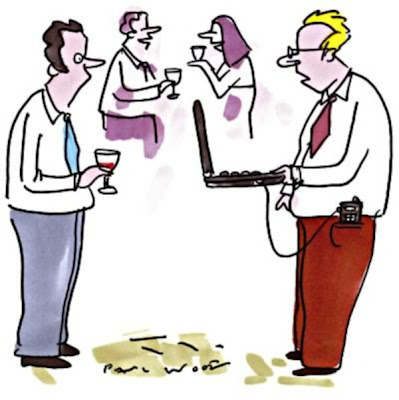 ‘I thought I had an encyclopedia inside me but it was just a blog.’

variation on The Spectator cartoon
Posted by Aniruddha G. Kulkarni at 9:15 AM 3 comments: