("...Punctured though night is by light-bulbs,

Wikipedia: "Apollo, like other Greek deities, had a number of epithets applied to him, reflecting the variety of roles, duties, and aspects ascribed to the god. However, while Apollo has a great number of appellations in Greek myth, only a few occur in Latin literature, chief among them Phoebus which was very commonly used by both the Greeks and Romans in Apollo's role as the god of light."

Thomas Pynchon, 'Gravity’s Rainbow', 1973 is considered one of the greatest books of 20th century.  I have still not read it.

Paris Review informed me this month how the book talked about “Phoebus”, an international light-bulb cartel.

"Phoebus fixes the prices and determines the operational lives of all the bulbs in the world, from Brazil to Japan to Holland..."

But  Phoebus is NOT Pynchon's imagination. It really existed!

"On 23 December 1924, a group of leading international businessmen gathered in Geneva for a meeting that would alter the world for decades to come. Present were top representatives from all the major lightbulb manufacturers, including Germany’s Osram, the Netherlands’ Philips, France’s Compagnie des Lampes, and the United States’ General Electric. As revelers hung Christmas lights elsewhere in the city, the group founded the Phoebus cartel, a supervisory body that would carve up the worldwide incandescent lightbulb market, with each national and regional zone assigned its own manufacturers and production quotas. It was the first cartel in history to enjoy a truly global reach...."

And concludes on a grim note:

"...True, today’s lighting industry is much larger and more diverse than it was in the 1920s and ’30s, and government monitoring of collusive behavior is more vigilant. Nevertheless, the allure for businesses to cooperate in such a market is strong. And the Phoebus cartel shows how it could succeed." 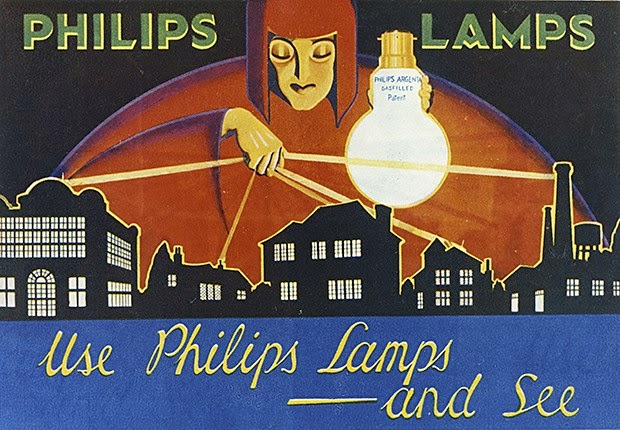 As I looked at the picture above and re-read lines from Mardhekar's poem, they assumed a new meaning.

Is that towering figure- who looks like Lee Falk's Phantom- the god Phoebus?

Isn't any such carteling activity ethically equivalent to pumping of darkness? Isn't this an integral shadowy side of current version of capitalism?

These lines by Mardhekar, which appear in the very first post of this blog, are indeed a powerful metaphor. They are funny and poignant. I never thought they would come handy here.