“(death) is the destination we all share. No one has ever escaped it. And that is as it should be, because Death is very likely the single best invention of Life. It is Life’s change agent. It clears out the old to make way for the new.”

"...he was a great, transformative, and historical figure."

If contemporary god-builders — seeking to stave off death with blue-green algae, Bikram yoga and cryogenics — are more crass and materialistic than those in Gray’s story, ultimately they fail to appreciate the same point: that life seems to get much of its meaning from the fact that it ends.

MIKE DAISEY, one of the great solo storytellers of contemporary theater, when asked "What do you think of Mr. Jobs as an artist?" by CATHERINE RAMPELL:

"Well I think that Steve Jobs’s tremendously effective as an artist in that sense. However, it’s deeply unfortunate that he sold out his ideals.

This is someone who had an opportunity to transform the world with these devices and then did. He started as someone whose devices were forged out of piracy, and today it’s the most locked-down computer company in the world. As a capitalist I’m sure that it’s very attractive. But if we’re talking about him as an artist, I’d say that he completely lost track of his ideals."

I am grateful to Mr. Jobs for a PC having graphical user interface and Toy Story (1995)

But clearly US President Barack Obama went overboard when he said: "...he changed the way each of us sees the world."....What does he mean by "each of us"?

The New York Times, Sept. 30 2011 claimed: Neuroscience suggests that Apple's smartphone activates the part of the brain associated with feelings of love and compassion.

If this is true, I wonder if it is good or bad for humanity.

There has been some great humour created at the cost of the late Mr. Jobs.

The funniest of them is the episode of The Simpsons "Mypods and Boomsticks", 7th episode of 20th season first aired on November 30, 2008.

When Lisa Simpson complains to Mr. Jobs about the stiff bill and pleads for a concession, Mr. Jobs replies: “People think our slogan is 'Think Differently' but our real slogan is 'No Refunds'.”

It will be an interesting execrise to discover "people think" slogans vis-a-vis real slogans for many other products and institutions.

Here is an obituary cartoon created by Ted Rall before Mr. Jobs passed away. Warning: It is not hagiographic. 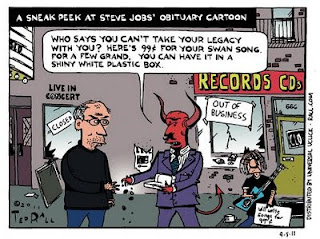 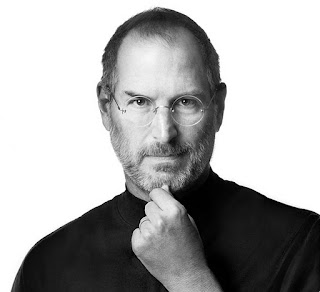