King Parikshit, Charles Darwin: Ultimately the Worms will Not be Cheated

"How Many Leaves on the Tree of Life?...a recent study led by scientists at Dalhousie University, concludes that there are about 8.7 million species on Earth...And that 8.7 million? It doesn’t include the species of bacteria, which may number in the millions. It is the bare truth to say that no matter how much we think we know about life on Earth, we know almost nothing."

Yet at the very heart of Darwinism is the principle that there is no such thing as “levels” or “supersession”; as Darwin adjured himself in one of his marginalia, “Never use the word higher or lower.” Human beings are in no biological sense higher than cockroaches; we have simply evolved a different adaptive strategy.

In the same way, regarded simply as a strategy for survival, no human polity is higher or lower than another, only (momentarily) more or less successful.
(Spring 2011)

"Before Europeans arrived, the upper Midwest, New England and all of Canada had no earthworms—they had been wiped out in the last Ice Age.
In worm-free woodlands, leaves pile up in drifts on the forest floor. Trees and shrubs in wormless places depend on litter for food. When earthworms arrive, they quickly consume the leaf litter, packing the nutrients deep in the soil in the form of castings (worm excrement). Suddenly, the plants can no longer feed themselves; their fine, surface-level root systems are in the wrong place. Wild sarsaparilla, wild oats, Solomon's seal and a host of understory plants die off; grass-like species such as Pennsylvania sedge take over. Sugar maples almost stop growing, and ash seedlings start to thrive.
Spread today by farmers, gardeners and anglers, earthworms are obsessive underground engineers, and they are now remaking swathes of Minnesota, Alberta and Ontario. Nobody knows what will happen next in what ecologists see as a gigantic, unplanned, centuries-long experiment."

It's titled : ‘WORM FOR A CENTURY, AND ALL SEASONS’

"...Trifles may matter in nature, but they are unconventional subjects for last books.

Most eminent graybeards sum up their life’s thought and offer a few pompous suggestions for reconstituting the future. Charles Darwin wrote about worms—The Formation of Vegetable Mould, Through the Action of Worms, With Observations on Their Habits (1881)...

...What better than worms: the most ordinary, commonplace, and humble objects of our daily observation and dismissal. If they, working constantly beneath our notice, can form much of our soil and shape our landscape, then what event of magnitude cannot arise from the summation of small effects. Darwin had not abandoned evolution for earthworms; rather, he was using worms to illustrate the general method that had validated evolution as well. Nature’s mills, like God’s, grind both slowly and exceedingly small...

...We who lack an appreciation of history and have so little feel for the aggregated importance of small but continuous change scarcely realize that the very ground is being swept from beneath our feet; it is alive and constantly churning...

...The pleasure of reading Darwin’s worm book lies not only in recognizing its larger point but also in the charm of detail that Darwin provides about worms themselves...

...Here we also find an overt and an underlying theme, in this case leaves and burrows versus the evolution of instinct and intelligence, Darwin’s concern with establishing a usable defi nition of intelligence, and his discovery (under that defi nition) that intelligence pervades ‘lower’ animals as well. All great science is a fruitful marriage of detail and generality, exultation and explanation. Both Darwin and his beloved worms left no stone unturned....

...Then I came to the very last paragraph, and I shook with the joy of insight. Clever old man; he knew full well. In his last words, he looked back to his beginning, compared those worms with his fi rst corals, and completed his life’s work in both the large and the small:

The plough is one of the most ancient and most valuable of man’s inventions; but long before he existed the land was in fact regularly ploughed, and still continues to be thus ploughed by earthworms. It may be doubted whether there are many other animals which have played so important a part in the history of the world, as have these lowly organized creatures...

...A year after publishing his worm book, Darwin died on 19 April 1882. He wished to be buried in the soil of his adopted village, where he would have made a final and corporeal gift to his beloved worms. But the sentiments (and politicking) of fellow scientists and men of learning secured a guarded place for his body within the well-mortared floor of Westminster Abbey. Ultimately the worms will not be cheated, for there is no permanence in history, even for cathedrals..."

Parikshit (Sanskrit: परिक्षित्), grandson of great Arjuna, was once the mightiest king in mythological India. He was cursed to die bitten by a snake. 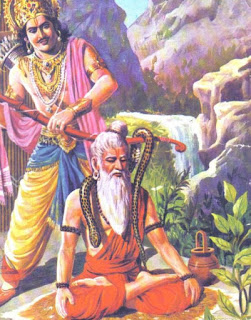 (this is why he was cursed by Shamika-rishi's- in meditation above- son)
courtesy: Amar Chitra Katha and blog http://jayarama.wordpress.com

To escape it, he built a magnificent new palace. It was raised on a single tall pillar, and the base of the pillar was inside a moat. Many warriors and Brahmanas skilled in the art of repelling snakes were placed around the palace to protect the King. The King spent all the time in this palace, surrounded by Brahmanas learned in the Vedas.

Takshaka wanted to avenge the wrongs of the Pandavas committed upon his race- snake people- Nagas.

Takshaka transformed himself into a worm and entered a fruit that were being carried for the king. King chose exactly the same fruit that Takshaka was present in. He took one bite, then the insect came out of the fruit. In an instant, Takshaka assumed his form as a great serpent. He then entwined himself around the hapless king, and sunk his great fangs in Parikshit's neck. As was to be expected, the King fell down dead, charred by the potency of the snake's venom.

Well-mortared floor of a cathedral or a palace on a single tall pillar, worms will not be cheated. 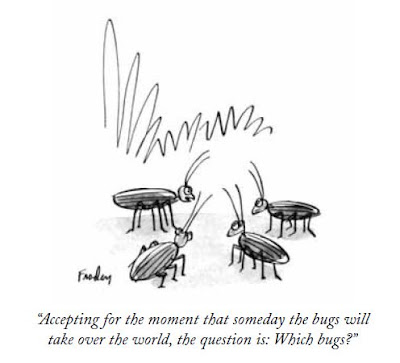