1857: Ambala and Lahore Had Everything Important to Communicate

India's First War of Independence, the Great Rebellion, the Indian Mutiny, or the Sepoy Mutiny began this day, May 10, 159 years ago.


“We are in great haste to construct a magnetic telegraph from Maine to Texas but Maine and Texas, it may be, have nothing important to communicate."


“...Marx's appreciation of the laws of unintended consequence, and his disdain for superficial moralism, also allowed him to see that there was more to the British presence in India than met the eye. No doubt the aim of the East India Company had been the subordination of Indian markets and Indian labour for selfish ends, but this did not alter the fact that capitalism was also transforming the subcontinent in what might be called a dynamic way. And he was clear-eyed about the alternatives. India, he pointed out, had always been subjugated by outsiders. "The question is not whether the English had a right to conquer India, but whether we are to prefer India conquered by the Turk, by the Persian, by the Russian, to India conquered by the Briton." If the conqueror was to be the country that pioneered the industrial revolution, he added, then India would benefit by the introduction of four new factors that would tend towards nation building. These were the electric telegraph for communications, steamships for rapid contact with the outside world, railways for the movement of people and products, and "the free press, introduced for the first time to Asiatic society, and managed principally by the common offspring of Hindus and Europeans". His insight into the Janus-faced nature of the Anglo-Indian relationship, and of the potential this afforded for a future independence, may be one of the reasons why Marxism still remains a stronger force in India than in most other societies...”

Saul David writes in  'The Indian Mutiny, 1857', 2002 in the chapter titled ‘The Electric Telegraph has saved us’:

"...By enabling the authorities at Lahore, in the words of one senior official, to ‘disarm the native troops before they had received one word’ of the uprisings at Meerut and Delhi, the telegraph messages played a key role in the preservation of British India. ‘The Electric Telegraph has saved us,’ wrote Donald MacLeod, the Financial Commissioner of the Punjab. He was right. If Lahore had fallen to the rebels, the rest of the Punjab would probably have followed suit. And if the Punjab — where the majority of European troops were stationed — had been lost, British India might not have endured. As it was, its survival was in the balance for many months to come..." 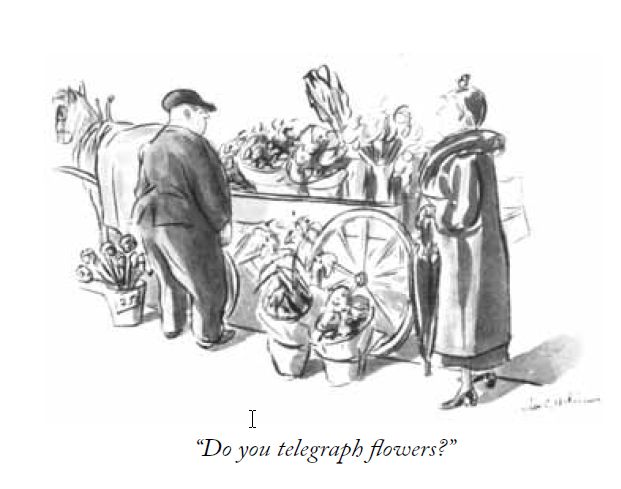 Artist: Helen E. Hokinson, The New Yorker, April 1 1933
Posted by Aniruddha G. Kulkarni at 9:00 AM No comments: Links to this post