“There seems to be no remedy for the vice of literature; those afflicted persist in the habit despite the fact that there is no longer any pleasure to be derived from it.”

"...Another of France’s wildly prolific authors, Honoré de Balzac, felt that the most effective spur to productivity was abject poverty. As a best-selling writer in his early 30s, Balzac looked back fondly upon his younger days as a bohemian, living in a garret and gnawing on a diet of bread, nuts, fruit and water. (“I loved my prison,” he wrote, “for I had chosen it myself.”) Even when successful, he would wake at midnight, symbolically don the habit of a medieval monk, and write for eight hours straight, fueled by pots of coffee. His biographer Graham Robb suggests that Balzac went so far as to deliberately run up debts to force himself to churn out the pages..."

As I was looking at old issues of Abhiruchi (अभिरुचि) I have preserved, I came across this letter of Bhau dated 23 November 1984, to the founder editor of the magazine P A Chitre (पु आ चित्रे), father of Dilip Chitre (दिलीप चित्रे), popularly known as Baburao (बाबुराव).

The letter was printed in the magazine's issue dated January-February 1985.

The letter is so poignant...read this line :

Reminds me of Woody Allen:

"I feel that life is divided into the horrible and the miserable. That’s the two categories. The horrible are like, I don’t know, terminal cases, you know, and blind people, crippled. I don’t know how they get through life. It’s amazing to me. And the miserable is everyone else. So you should be thankful that you’re miserable, because that’s very lucky, to be miserable." 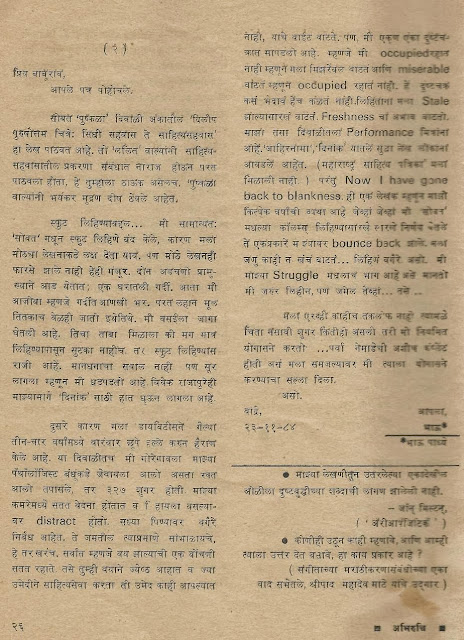 Now some boasting...This issue of the magazine has a short story of mine.

What that means is Bhau and I shared the same literary space.

("Even if I pass on as a grinning joker,
company of Dante and Shakespeare in proximity
somewhere in my good fortune after my death-!
even this thought is no less consoling")

Not for me. No heaven or hell. Whatever it's, it's right here...and now I'm imitating Bhau: I sat 4th-seat on a bench in second-class of  Mumbai local train only to discover that Bhau was sitting at the window seat, wind in the face, of the same bench!

The idea is more than consoling for me.

I repeat the following cartoon that I used for Bhau even earlier because I simply love it. I can't take my eyes off the speaking lady's face and can't stop smiling for a while. 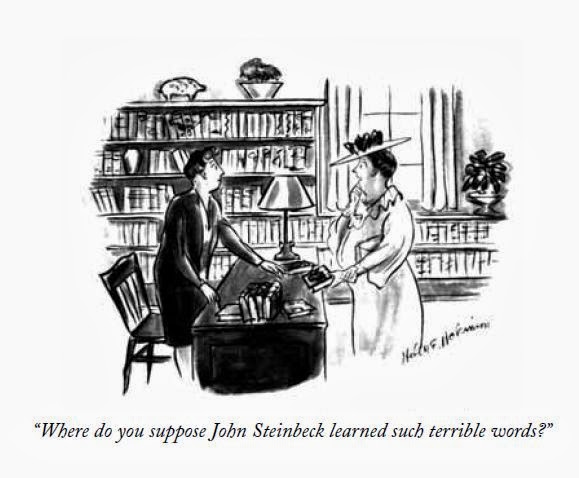 "Where do you suppose Bhau Padhye learned such terrible words?"