English 'Ralph Darnell' is NOT scarce. Marathi 'Plaseecha Ranasangram' of D B Mokashi is!

"We know that the major players are positioning themselves for a very uncertain future, but there are really only two major players, Amazon and Google. Everyone else is trying to figure out the best way to go bankrupt or to become something else, not publishers, God knows, but “content providers” for whatever word vessels the future will offer. From their point of view, the book was just a “platform” that had its day but it’s done now, and so what?" (October 21 2011)

"For me, it’s the history that exists beyond the margins and the textbooks and what we normally consider to be history"

Once in six months or so I visit 'Varada Prakashan' (वरदा प्रकाशन) in Pune to buy books.

The book is based on 'Ralph Darnell' by Meadows Taylor, 1865.

Mr. Taylor became very famous for his book 'Confessions of a Thug', 1839. The book became a best seller in 19th century Britain. (More on it at the end of this post.)

That book was translated into Marathi as 'Thagachee Jabanee' (ठगाची जबानी ) by Prof Va Shi Apte (वा शि आपटे ). It made waves even in Marathi, running into two editions. Mokashi mentions in his preface how he as a kid enjoyed reading it.

I did not know who Colonel Meadows Taylor was but I have always liked whatever DBM has written. 'Plaseecha Ranasangram' was no exception.

Among other things, the book informs us the extent to which the British empire was built on deception in this country...Robert Clive constantly reminding me of Tony Blair.

On the back cover of Marathi book, publisher says:

Thanks to the internet- Google Books, Archive.org- 'Ralph Darnell' is not scarce any more. But what is scarce is Mokashi's Marathi book!

I wonder whether Varada Prakashan will reprint it once the current print of 1995 is sold out.

I was looking for six volumes of Rajaram shastri Bhagwat's (राजरामशास्त्री भागवत) literature edited by Durga Bhagwat (दुर्गा भागवत) published by Varada. Mr. Bhave told me how it took decades for them to sell out the last edition of R Bhagwat's literature and that it was very unlikely that he would publish them again.

The late D B Mokashi is one of the best Marathi writers of 20th century and many of his books are not available in bookshops and almost none of them is availabe in softcopy format.

I have already argued here that Marathi and the other Indian languages need Google books far more than the English and others.

My conviction is now even stronger. 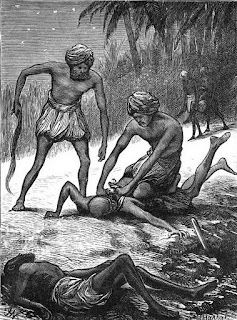 from : Confessions of a Thug

Mike Dash, the author of 'Thug' 2005, quoted at the top of this post, says this about 'Confessions of a Thug' by Meadows Taylor:

"...These early accounts influenced the way in which Thuggee was perceived, both in India and elsewhere. They were expanded on in a hugely successful contemporary novel entitled Confessions of a Thug written by Meadows Taylor, a British officer based in Hyderabad. Taylor turned his own experiences of the anti-Thug campaign into what was widely acclaimed as the greatest ‘chiller’ of its day, and his protagonist (a murderer named Ameer Ali, whose ‘confession’ was based on the deposition of a real Thug) was more ruthless, more successful and more free from the pangs of conscience than even the killers whose confessions had peppered the first historical accounts. Ali’s ‘guiltless confessions of multiple murder’ were – a reviewer in the Literary Gazette declared – ‘enough to freeze the blood in our veins’, and Taylor himself was flattered to hear that the young Queen Victoria herself was so impatient to read his final chapters that she could not wait for the pages to be bound, asking that the running sheets to be sent directly to her as they came off the press..."
Posted by Aniruddha G. Kulkarni at 9:00 AM No comments: Links to this post