Few bad or evil things can have some good consequences. Unintended mostly.

Black plague of 14th century that annihilated third of Europe's population may have caused emergence of the Renaissance.

Tragic crash of meteor 65 million years ago wiped out dinosaurs giving a chance to rat like mammals to launch their bid to rule the earth one day in future.

Leave alone these big things. Even a minor (not so minor for those like me who suffer from it) ailment like common cold too can have a positive fall-out. 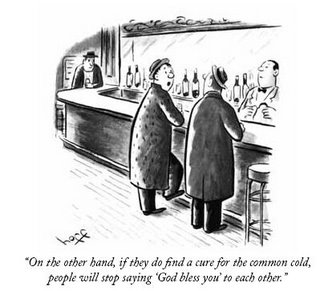 BTW- man may achieve whatever. For example virtual sex as in Minority Report. But he will not stop dreaming of eradicating common cold. Good luck!
Posted by Aniruddha G. Kulkarni at 3:33 PM No comments: Links to this post