Who is the Greatest Indian Bilingual Intellectual?

"We are often told that an era is opening in which we are to see multitudes of a common sort of readers, and masses of a common sort of literature; that such readers do not want and could not relish anything better than such literature, and that to provide it is becoming a vast and profitable industry. Even if good literature entirely lost currency with the world, it would still be abundantly worth while to continue to enjoy it by oneself. But it never will lose currency with the world, in spite of momentary appearances; it never will lose supremacy. Currency and supremacy are insured to it, not indeed by the world's deliberate and conscious choice, but by something far deeper, -- by the instinct of self- preservation in humanity."

"The first traces of the Konkani language were written by Sant Namdev..."

Ramachandra Guha has written an essay that

"interprets the rise and fall of the bilingual intellectual in modern India. Making a distinction between functional and emotional bilingualism, it argues that Indian thinkers, writers and activists of earlier generations were often intellectually active in more than one language.

The decline of the bilingual intellectual is a product of many factors, among them public policy, elite preference, new patterns of marriage, and economic change."

He wrote in Marathi, Konkani, Hindi and Punjabi. Sixty-one of his compositions are included in the Guru Granth Sahib.

Oh my word! He knew how to write!

One of his Hindi abhangas:

(a stone makes a step on which we plant our foot, another stone makes an image of god in which we put our faith and worship it. Both are really stones. The difference is in belief.)

Namdev's resume is still not finished!

M V Dhond म वा धोंड argues that it was Namdev who created one of the most enduring 'myths' of India- Lord Vitthal.

Namdev dragged Vitthal to the homes of his devotees and made him do menial work for them.

Namya's poetry will never lose currency with the world, in spite of momentary appearances; it never will lose supremacy. Currency and supremacy are insured to it, not indeed by the world's deliberate and conscious choice, but by something far deeper, -- by the instinct of self- preservation in humanity.

This is how I saw the following picture: the artist (say Namdev) creates the myth (say Lord Vitthal) and the myth in turn places a laurel wreath on the artist's head. (Vasant Sarwate is a big fan of Steinberg. I should ask him.) 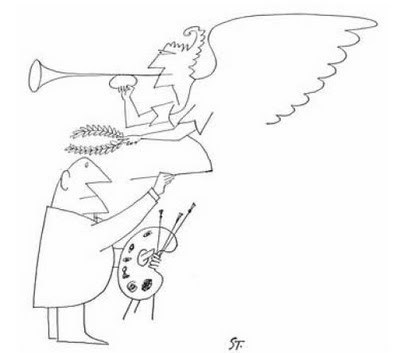 Artist: Saul Steinberg, The New Yorker, Jan 6 1962
Posted by Aniruddha G. Kulkarni at 9:00 AM No comments: Links to this post