Charulata-Nastanirh: A Jugalbandi of Ustad Satyajit and Pandit Rabindranath

"So Freud leaves us with one overriding question: what is a good life for incestuously-minded people like ourselves, people who must not have what they really want, people whose fraught, doomed love for their parents has made love a hopeless passion; and who fear the loss of love they know to be their birthright and their fate? It is always going to be difficult for us, Freud says, to be excited and kind, to be fair and satisfied. Because , in reality, we can never be or have the object of desire, we are always the left-out ones. And because the object of our desire is forbidden, it is imperative for our (psychic) survival that we are left out. Oedipus was the man who couldn't bear being left out"

Harold Bloom 'The Anxiety of Influence':

"Poetic Influence--when it involves two strong, authentic poets--always proceeds by a misreading of the prior poet, an act of creative correction that is actually and necessarily a misinterpretation. The history of fruitful poetic influence, which is to say the main traditions of Western poetry since the Renaissance, is a history of anxiety and self-saving caricature of distortion, of perverse, willful revisionism without which modern poetry as such could not exist."

"I watch older films mostly. I recently saw The Music Room (1958) by Indian director by Satyajit Ray. It is a jaw dropper, an unbelievable movie."

"Alas, novelists suffer so that we might know better. Perhaps no other novelists suffer as well as Russian ones, but, thankfully you don’t have to be a Russian to learn from them. The whole world is the beneficiary of that inheritance."

(In India, I would substitute Russian with Bengali in the quote above).

In 1991-92, almost everyday, in Kolkata, I walked back from my office on Shakespeare Sarani to the residence on Hazra Road via Mr. Satyajit Ray's residence on Bishop Lefroy road.

Just like many temples I walk past every day but never enter, I never felt like meeting Mr. Ray or asking for an autograph.

I wanted his 'darshan' (दर्शन) alright but I didn't want to disturb him.

We got to see many of his movies, without English subtitles, on Door-Darshan after his death.

His body was kept at my favourite Nandan complex. It was stone's throw from my office. I didn't go there either because now he wasn't there and if he was, I still did not want to disturb him.

We moved from Kolkata soon after he died. There was now one less reason to regret it!

'Pather Panchali', 'Jalsaghar', 'Kanchenjungha' and 'Charulata' have never left my mind since then.

I keep watching 'Jalsaghar' ('The Music Room', 1958) once in a while. Recently. I watched 'Charulata' after almost a decade and saw 'Aranyer Din Ratri' (good except Sharmila Tagore) without English subtitles and 'Mahanagar (good), Jana Aranya (very good)' for the first time.

(BTW- Most of Ray's films are based on a good piece of literature. New wave Marathi film-makers should realize this.)

I keep reading Andrew Robinson's 'Satyajit Ray: The Inner Eye', 1989. Earlier I was very impressed with the book. I still like it but not as much.

I have read Ray's 'Our Films, Their Films', 1976- I have lost my copy- and Gopa Majumdar translated Ray's Bengali book- "Speaking of films",2005 ('Bishay Chalachitra').

Ray's essay: 'On Charulata', from the latter, is masterly.

Any one who wants to understand the relation between a novel and the cinema based on it, strengths and weaknesses of both media, how to remain loyal to the original art while interpreting it will do no better than reading and re-reading the essay.

As I have said earlier 'Charulata', 1964 had always been a great haunting song for me but after reading the essay it became even greater.

Nastanirh (The Broken Nest), 1901 is a very delicate story. According to Andrew Robinson:"...Kadambari Devi, Tagore's beloved sister-in-law, inspired him to wrire Nastanirh...She in some ways resembled Charu, he Amal and while his elder brother much of the unworldliness and naivety of Bhupati...Kadambari Devi committed suicide in 1884 for reasons unknown..."

Apart from the delicate subject the book has "inconsistencies" which makes it difficult to adapt for the screen. (Read about a similar challenge in "The Tough Job of Adapting Edgar Allan Poe to film", The New York Times, April 20 2012.)

Ray says:"...when one reads the novel, the sheer beauty and power of Tagore's language wipe out these inconsistencies".

Pather Panchali,1955- equally great film- did not pose this kind of challenge because, as Ray himself says: "Bibhutibhushan Bandopadhyay is one writer whose stories are a gold mine of cinematic observation...Even in his lesser works his eye and ear produce marvels of observation...Yet another quality Bibhutibhushan had was a wonderful ear for lifelike speech..."

Therefore, when Ray decided to make a film based on Nastanirh, it was like master Rabindranath throwing a challenge at his prodigally talented understudy only to see it being tackled successfully.

Ray has said of Indian music:"...In the process of execution, the musician can achieve beauty, he can achieve tension and excitement, and he can achieve sublimity. But he cannot achieve drama, because there is no conflict in the music."

True but isn't Jugalbandi or Jazz-Jamming about conflict and drama? In jugalbandi, both musicians act as lead players, and a playful competition exists between the two performers. Turn right, turn right. Turn left, turn left. Both play or sing their ass off! And we are sozzled with great enchantment.

Sadly, I don't read Bengali. But reading Ray's essay, I see how hard he had to struggle to master the novel. And in that struggle, I see all the elements of a great drama. And hence Jugalbandi!

In the said essay, Ray gives example of opening scene of Charulata that runs for seven minutes. The scene attempts to use a language entirely free from literary and theatrical influences. Except for one line of dialogue the scene says in terms that speak to eye and the ear. He also explains how recurring motifs, appearing at several points in a film, often in different contexts, serve as unifying elements. A major motif gets introduced to us in the scene.

In short, a great cinema artist is going to rise to the challenge of a Jugalbandi with a great novelist using his very own instruments namely speaking to the eye and the ear; recurring motifs...

Ray says: "...The film opens with the letter 'B' being embroidered on a handkerchief by Charu. This will prove to be a major motif in the film. We will learn later that the handkerchief is meant for Charu's husband Bhupati. It will trigger off the conversation which will make Bhupati aware of Charu's loneliness. Towards the end of the film, after Bhupati's traumatic discovery of Charu's feelings towards Amal, Bhupati will use the handkerchief to wipe his tears, and will notice the embroidery before he decides to return to his wife..." 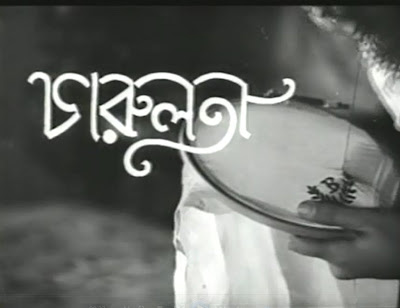 B is also for Bankim Chandra Chattopadhyay

How I wish Rabindranath saw the film! I wonder if Vinoba Bhave saw it. And if he did, where would he rate Mr. Ray in relation to his dear Ravibabu.

By the way, I have often wondered if a novel like Nastaneer or film like Charulata would be created in Marathi.

I think this is infantile. Now, 'Manoos' may be a good film but art like 'Devdas' or 'Nastaneer' don't have 'answers'. Indeed they attempt answering our fundamental questions like what it means to be- to use Nietzsche's phrase- "human, all too human".

John Gray says: What Freud offers is a way of thinking in which the experience of being human can be seen to be more intractably difficult, and at the same time more interesting and worthwhile, than anything imagined in the cheap little gospels of progress and self-improvement that are being hawked today.

Doesn't watching Charulata prove to us that "the experience of being human can be seen to be more intractably difficult" as we go through life but "at the same time more interesting and worthwhile" as we enjoy one of the most elating aesthetic experiences in cinema?

Unlike Oedipus some of us can now bear being left out.
Posted by Aniruddha G. Kulkarni at 9:00 AM No comments: Links to this post