What if Anna Hazare were to be an Army Deserter

"Indian democracy has evolved an institutional structure on the basis of the principles and prescriptions laid down in the Constitution. But there is a wide gulf between precept and practice. Democracy as practised by the state and society is far removed from the ideal form of democracy in which equalities – political, cultural and economic – are continuously negotiated. The gulf between the concept and practice may not be fully bridged ever, but it could be reduced through continuous public reasoning and dialogue. Amartya Sen has argued that the availability of a most perfect institutional structure need not necessarily ensure the success of democracy. The success would largely depend upon the intervention of human agency for using the available opportunities.

"...The RTI reply from Dakshin ASC records (South) dated August 3 puts the record straight that Anna "never deserted" the Army, and that he was "honourably" discharged from the armed forces on completion of the 12 years of his service..."

What if he deserted army? What has it to do with the movement he has started now? Is deserting army a mistake? And even if it is, did not Mahatma Gandhi constantly make mistakes if not blunders and tried to learn from them?

"During the First World War, Bertrand Russell was one of a very small number of intellectuals engaged in pacifist activities, and, in 1916, he was dismissed from Trinity College following his conviction under the Defence of the Realm Act. A later conviction resulted in six months' imprisonment in Brixton prison. Russell was released from prison in September 1918."

Adam Hochschild has written a book 'To End All Wars: How the First World War Divided Britain' on these 'pacifist activities'.

"...Hochschild's book is not another lament for a lost generation, a mere backward look at the folly and waste of war. He sets out to restore to this story those who at the time proclaimed the fighting to be madness, in the face of mass conformity moulded by one of the greatest propaganda campaigns in history...".

"...during this greatest crisis of his generation, loved his country deeply but believed from the very first moments that the war was an appalling mistake.

Part of Russell’s intellectual bravery lay in his willingness to confront that last set of conflicting loyalties. He described himself poignantly in the autumn of 1914 as being “tortured by patriotism. . . . I desired the defeat of Germany as ardently as any retired colonel. Love of England is very nearly the strongest emotion I possess, and in appearing to set it aside at such a moment, I was making a very difficult renunciation.” What left him even more anguished was realizing that “anticipation of carnage was delightful to something like ninety per cent of the population. . . . As a lover of truth, the national propaganda of all the belligerent nations sickened me. As a lover of civilization, the return to barbarism appalled me. As a man of thwarted parental feeling, the massacre of the young wrung my heart.” Over the four years to come, he never yielded in his belief that “this war is trivial, for all its vastness. No great principle is at stake, no great human purpose is involved on either side. . . . The English and French say they are fighting in defence of democracy, but they do not wish their words to be heard in Petrograd or Calcutta.”..." 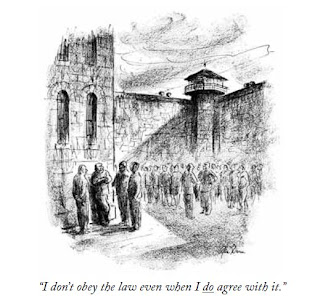 If we don't put our democracy in order, we will hear even erstwhile law-abiding citizens saying: I don't obey the law even if I do agree with it.
Posted by Aniruddha G. Kulkarni at 8:42 AM No comments: