In India, the most talked about element in year 2008 was uranium. Panacea to all our problems of national security and energy.

“When it comes to press coverage, uranium does pretty well among its peers on the periodic table. Surely strontium or seaborgium or even manganese would kill for its name recognition. But how well do we really know the element in whose long, mushroom-shaped shadow we all live? If someone handed you two rocks and asked which was uranium, would you have any idea how to tell?

Probably not. For most of us, uranium is an abstraction, more like a vitamin or a gigabyte than like, say, copper. We know it is important, and we know more or less what it’s for, but it’s not something we’d recognize by sight.

With “Uranium: War, Energy, and the Rock That Shaped the World,” the journalist Tom Zoellner sets out to rectify that lack of familiarity. Part history and part travel narrative, the book presents the atomic age not through its scientists or grand strategists, but through its raw material: an undistinguished-looking ore, more common than tin, whose destructive power when refined is hard, even today, to imagine. As Zoellner writes, “A single atom of uranium is strong enough to twitch a grain of sand. A sphere of it the size of a grapefruit can eliminate a city.”…”

Uranium deserves to be featured in a blockbuster Hindi film: “Amitabh’s Uranium” (inspired by Mackenna's Gold , 1969) 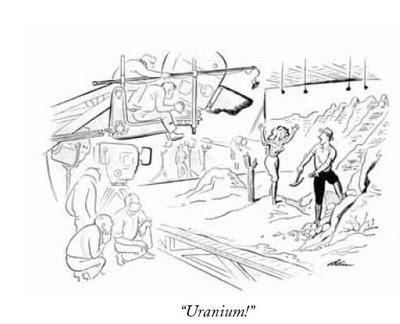