The Agony of Marsyas is the Inevitable Agony of the Human Soul in its Desire to Achieve God.


‘Decent of you. Could we get in there, I wonder?’


‘That’s an image of love, actually. Apollo and Marsyas.’


‘The agony of Marsyas is the inevitable agony of the human soul in its desire to achieve God.’


‘The things you failed to learn at the Courtauld.’


‘I don’t believe it though. Someone is flayed really. And there’s only blood and pain and no love.’ 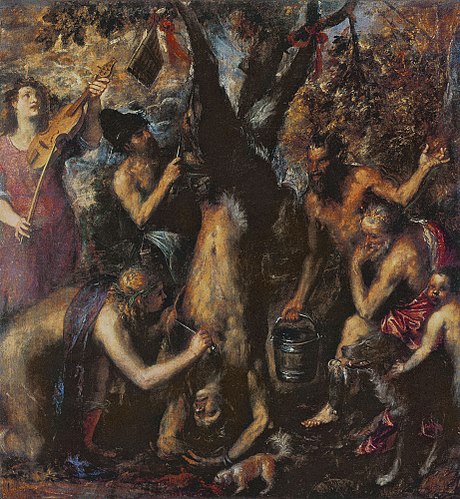 The Flaying of Marsyas

Dan Piepenbring, The Paris Review, July 2015:
“...The painting was one of Titian’s last, and it’s full of primeval fire. It’s drawn from Ovid’s Metamorphoses, in which the satyr Marsyas brags that his skills on the auros, a double-piped reed instrument, are superior to Apollo’s on the lyre. The two agree to a kind of duel-cum-jam-session. But Apollo is, of course, a god, meaning he’s not just a better musician but a more temperamental one, inclined to punish all who defy him. And so he flays Marsyas alive for his hubris, a fate Ovid describes with violent relish:
As he screams, the skin is flayed from the surface of his body, no part is untouched. Blood flows everywhere, the exposed sinews are visible, and the trembling veins quiver, without skin to hide them: you can number the internal organs, and the fibres of the lungs, clearly visible in his chest. The woodland gods, and the fauns of the countryside, wept … The fertile soil was drenched, and the drenched earth caught the falling tears, and absorbed them into its deep veins.
Titian, painting with his brush and his thumb from a palette of squalid browns and reds, depicts the flaying every bit as vividly. There’s something especially gruesome about that little dog at the bottom, sniffing, if not lapping, at a puddle of blood. “Did Titian know that really human life was awful,” Murdoch writes in Henry and Cato, “that it was nothing but a slaughterhouse?” Short answer: yes....”
Posted by Aniruddha G. Kulkarni at 9:00 AM No comments: Links to this post


John Gray: “...In his letter commenting on Russell’s book on China, Conrad wrote: ‘I have never been able to find in any man’s book or any man’s talk anything convincing enough to stand up for a moment against my deep-seated sense of fatality governing this man-inhabited world.’ Russell’s passionate admiration for Conrad may have had a number of sources. One of them was surely his suspicion that Conrad’s sceptical fatalism was a truer account of human life than his own troubled belief in reason and science. As reformer, he believed reason could save the world. As a skeptical follower of Hume he knew reason could never be more than the slave of the passions. Sceptical Essays was written as a defence of rational doubt. Today we can read it as a confession of faith, the testament of a crusading rationalist who doubted the power of reason...”.

Walter Kirn: “...Then, that fall, Joseph Heller's Catch-22 appeared, abruptly downgrading war's special status as an existential crucible and also, unwittingly, beginning the process of rendering four-star male novelists irrelevant. The book treats war on a par with business or politics (to Heller they were very much the same), portraying it as a system for alienating people from their own interests and estranging them from their instincts. Protocol replaces principle, figures plucked from thin air supplant hard facts, and reason becomes rigamarole. Heller's island airbase of freaked-out aviators oppressed by cuckoo officers is the ding-a-ling civilian world in microcosm, not an infernal, tragic realm apart....”

JOSEPH EPSTEIN : “…Chichikov, the character at the heart of Gogol's masterpiece, is a lower-echelon civil servant with a corrupt past who specializes in what Gogol calls "blandiloquence," or elaborately empty compliments. Chichikov was brought up by a father whose last words of advice to his son were to please his superiors, not to be seduced by friendship, and to remember that nothing in life is so important as money—advice, notes Gogol, "that remained deeply engraved in his soul."…” 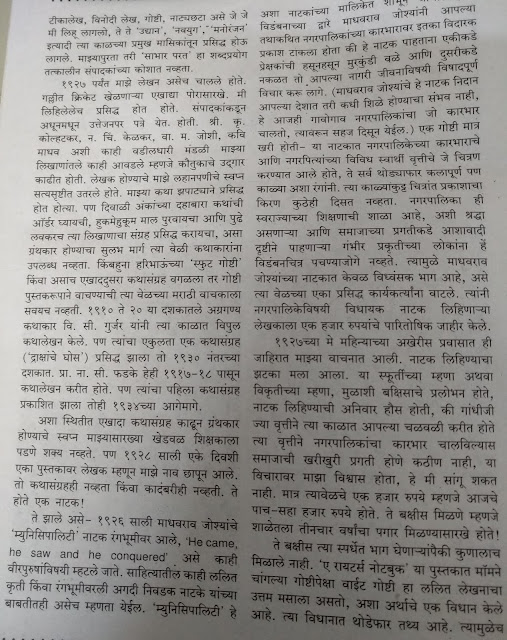