"...While Wavell thought both leaders were ‘obstinate, intransigent, crafty old men,’ he at least felt they could achieve something. But his conclusion was: ‘The two great mountains have met and not even a mouse has emerged.’ Wavell analysed the differences between them: Jinnah wanted Pakistan first and independence afterwards, ‘while Gandhi wants independence first with some kind of self-determination for Muslims to be granted by a provisional government which would be predominantly Hindu.’ Jinnah simply did not believe that a Hindu-majority government would grant any significant level of Muslim self-determination. He was betting on getting Pakistan from the British before they left.

They were unable to continue their meetings, which had anyway become less than cordial, in January 1945 because both were ill, Jinnah with pleurisy. If Gandhi was often distinguished by putting this whole body into the national struggle, Jinnah was no less so: he maintained a glassy outward persona while his body was racked with disease; every public appearance took an effort of will.

Jinnah unwound enough to mention to Gandhi that he was troubled by a nervous rash on one foot. Gandhi knelt on the floor and insisted he remove Jinnah’s shoes and socks, then held the affected part, saying: ‘I know what will heal you. I will send it tomorrow morning.’ He sent a box of healing earth, which Jinnah accepted with his usual good manners, declaring he had already seen improvement, but in fact he made no more use of that than of anything else Gandhi had to offer...."
('Gandhi: The True Man Behind Modern India',  2011)

I came across the following well known picture dated 1939, capturing a moment as Gandhi was leaving Jinnah's house. 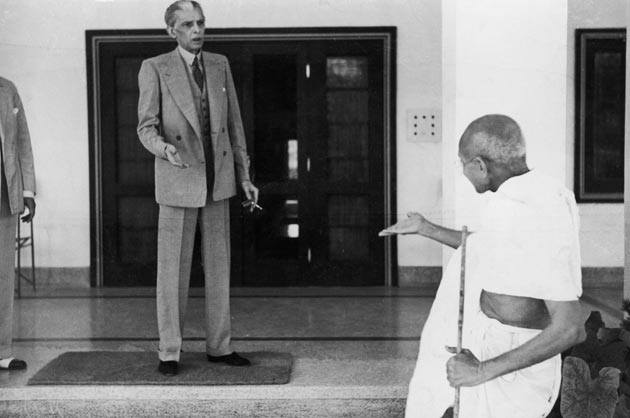 "Jinnahji, my brother: don't be shy, let me check your rash...."
Posted by Aniruddha G. Kulkarni at 9:00 AM No comments: