Thomas L. Friedman writes “Generation Q” ( NYT October 10, 2007): “I just spent the past week visiting several colleges — Auburn, the University of Mississippi, Lake Forest and Williams — and I can report that the more I am around this generation of college students, the more I am both baffled and impressed.

It’s for all these reasons that I’ve been calling them “Generation Q” — the Quiet Americans, in the best sense of that term, quietly pursuing their idealism, at home and abroad.

But Generation Q may be too quiet, too online, for its own good, and for the country’s own good. When I think of the huge budget deficit, Social Security deficit and ecological deficit that our generation is leaving this generation, if they are not spitting mad, well, then they’re just not paying attention…

…“Courage.” That is what real activism looks like. There is no substitute. ”

I feel the same about Indian university students. They have turned so conformist. Didn’t J Krishnamurti say: “To be young means to be bold”?

I am too young to forget and too old not to have seen Jayaprakash Narayan’s second independence movement, peopled by university students across the country, during 1975-76.

Today’s youth, at least those in public domain, are largely sons, daughters, nephews and nieces of established, wealthy politicians. How can they rebel? They need to be rebelled against!

In another scathing essay “The Fakebook Generation” ( NYT October 6, 2007), ALICE MATHIAS writes: “…Facebook purports to be a place for human connectivity, but it’s made us more wary of real human confrontation…

...For young people, Facebook is yet another form of escapism; we can turn our lives into stage dramas and relationships into comedy routines….”

Generation pretending to be active but essentially numb! 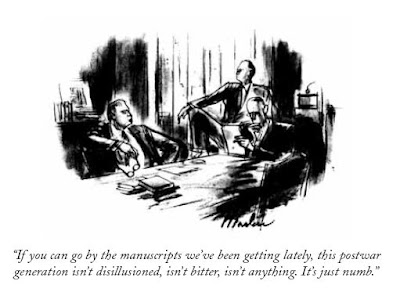 The Economist September 29, 2007 says: “A version of the “prisoner's dilemma” may suggest ways to break through the Kyoto impasse.”

What is Prisoner's Dilemma?

“In it, two prisoners accused of the same crime find themselves in separate cells, unable to communicate. Their jailers try to persuade them to implicate one another. If neither goes along with the guards, they will both receive a sentence of just one year. If one accepts the deal and the other keeps quiet, then the turncoat goes free while the patsy gets ten years. And if they both denounce one another, they both get five years.

If the first prisoner is planning to keep quiet, then the second has an incentive to denounce him, and so get off scot-free rather than spend a year in prison. If the first prisoner were planning to betray the second, then the second would still be better off pointing the finger, and so receive a five-year sentence instead of a ten-year one. In other words, a rational, self-interested person would always betray his fellow prisoner. Yet that leaves them both mouldering in jail for five years, when they could have cut their sentences to a year if they had both kept quiet.

Pessimistic souls assume that the international response to climate change will go the way of the prisoner's dilemma. Rational leaders will always neglect the problem, on the grounds that others will either solve it, allowing their country to become a free-rider, or let it fester, making it a doomed cause anyway. So the world is condemned to a slow roasting, even though global warming could be averted if everyone co-operated…”.

I first read about Prisoner's Dilemma in the essay by Douglas R. Hofstadter (now part of his book “Metamagical Themas, Penguin 1985) for Scientific American (May 1983).

It was an eye opener. I learnt you don’t have to be clever and cunning to be effective

TIT FOR TAT uses a very simple tactic:
Cooperate on move 1;
thereafter , do whatever the other player did the previous move

Today we are talking of Prisoner's Dilemma for climate change, yesterday it was about cold war and nuclear weapons, tomorrow it will about something else.

For the complex global issues and our every day mundane ones let us never forget elegant and effective TIT FOR TAT.

Let us not waste our time like the “clever prisoners” are doing in Alan Dunn's picture below. 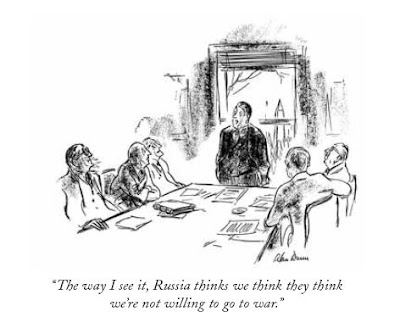