I wrote the original post a couple of days ago. I need to revise it because sadly M V Dhond म वा धोंड, who I have quoted extensively on this blog, died on December 5, 2007 at the age of 93. Along with D G Godse द ग गोडसे and Durga Bhagwat दुर्गा भागवत, he was one of the greatest art critic anywhere in the world. This now becomes his obituary.

I have had number of interesting exchanges with him. Some of them have already been described, more will follow. One such letter is included at the end of this post. He gifted me an autographed copy of his classic ज्ञानेश्वरी:स्वरुप, तत्त्वज्ञान आणि काव्य (Dnyaaneshwari : Nature, Philosophy and Poetry 1980) in year 2001. I was in tears when I received it.

Atheist Dhond would surely object to that description! Lucky he, now he knows if there is a heaven or a hell or just nothingness.

Asian Age December 3, 2007 has a moving photo (see the picture of a woman holding baby at the end of this post):

"Mothers hold their children affected during the Bhopal gas tragedy...Hundreds of thousands of babies were borne in the years since a deadly gas billowed over Bhopal in 1984, but the survivors of that night say their children are forever stunted by that tragedy."

"In June, activists working among the survivors of the 1984 Bhopal gas leak disaster obtained certain documents from the Prime Minister’s Office under the Right to Information Act. These documents suggest how keen the government is to relieve the Dow Chemical Company of any liability for the disaster and its toxic legacy.

...Dow has consistently denied inheriting any liability for the Bhopal legacy from UCC. However, back in the U.S., it set aside $2.2 billion to address future asbestos-related liabilities arising out of the Carbide acquisition. Activists of the International Campaign for Justice in Bhopal argue that if Dow can assume responsibility for asbestos-induced illnesses among victims in America, why then it should deny responsibility towards the victims of Bhopal and its continuing toxic legacy..."

In following Marathi poem, Mardhekar describes how Sharvari शर्वरी-young, hardworking, practical woman- while making cow-dung cakes, is telling Shabari शबरी-devotee of Ram- that Ram and Seeta are never going to return from Ayodhya to Dandakaranya to accept her offering. 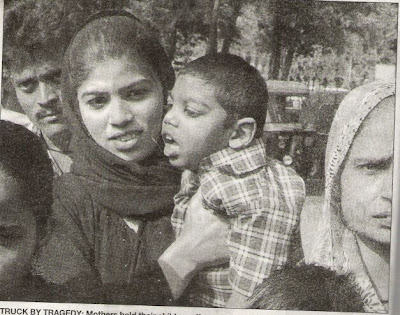 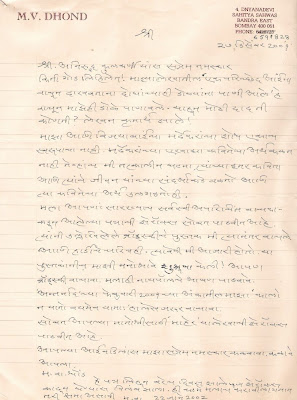 (double click on the image to get a larger view)
Ma Va Dhond's Letter in December 2001
Posted by Aniruddha G. Kulkarni at 9:00 AM 2 comments: Links to this post