"...With this go the horrors of emotional nationalism and a tendency to disbelieve in the existence of objective truth because all the facts have to fit in with the words and prophecies of some infallible fuhrer. Already history has in a sense ceased to exist, ie. there is no such thing as a history of our own times which could be universally accepted, and the exact sciences are endangered as soon as military necessity ceases to keep people up to the mark. Hitler can say that the Jews started the war, and if he survives that will become official history..."

"...In fourteen hundred and ninety-two
Columbus sailed the ocean blue


And then what? Everyone became wiser? People stopped building new ghettoes in which to practise the old persecutions? Stopped making the old mistakes, or new mistakes, or new versions of old mistakes? (And does history repeat itself, the first time as tragedy, the second time as farce? No, that’s too grand, too considered a process. History just burps, and we taste again that raw-onion sandwich it swallowed centuries ago.)

Dates don’t tell the truth. They bawl at us – left, right, left, right, pick ’em up there you miserable shower. They want to make us think we’re always progressing, always going forward..."

"...I, for one, would never expect any journal of The Hindu Group to describe Sardar Patel as  “a man rabidly communal in outlook.” It is only when I looked inside the journal that I saw that it was an article written by A.G. Noorani. The surprise therefore need not be about its authorship but simply about the fact that such a perverse article should have been made the cover page feature..."

It's interesting to note that Mr. Advani, in the post on his blog from which the quote above is borrowed,  has nothing to say about Mr. Noorani's stinging criticism of Mr. V D Savarkar (वि दा सावरकर),  in the pages of the same magazine, in February 2013 and his following claim of BJP's association with Savarkar:

"...But Savarkar was also the BJP’s ideologue. He was the one who coined the term Hindutva and distinguished his theme of hate elaborately from the ancient and noble faith of Hinduism..."!

Among all this, I miss Ya Di Phadke.

How I long to read him on the subject...(I once wanted his views on every piece of history of 20th century Maharashtra. I, rather audaciously, suggested to Mr. R Guha, by e-mail, that he saw see Mr. Phadke about the former's book, "A Corner of Foreign Field/ The Indian History of a British Sport", 2003 that  covers the life of Mr. Palwankar Baloo  बाळू पालवणकर/  पी. बाळू. I did it because most of Phadke's writing is not translated into English.)

I wonder who has taken on Phadke's role in narrating 20th century history of Maharashtra / India, especially its 'inconvenient' part,  in Marathi.

Today I don't see any name in his class writing in Marathi.

In the last quarter of 2013, I read the following two things by Mr. Noorani: 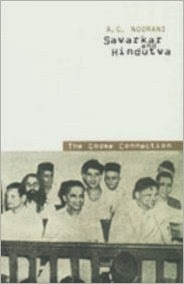 The late V D Savarkar poses a unique challenge to most middle-class Marathi speaking writers. I often feel they are too influenced by his two wonderfully moving patriotic songs and his other writings to be completely objective.

Sample the following two paragraphs from the essay.

"...If this “achievement” is magnified, Patel’s grave lapse in the failure to nip in time Savarkar’s conspiracy to murder Gandhi has been completely overlooked. Jayaprakash Narayan was among those who censured him. JP said on February 27, 1948, that he wanted “a man who was free from communalism to be in charge of the Home Department” (Bombay Chronicle, February 28, 1948)..."


"...What does the entire record reveal but a man who was rabidly communal in his outlook? The dislike of Muslims hardened over time into antipathy towards them. A hostile Vallabhbhai Patel became an anti-Muslim leader in cahoots with elements who were after their blood, the RSS and the Mahasabha. All this was overlooked and a pocket-version of the Great Patel and Bismark emerged. Simultaneously, the process of denigration of Nehru picked up speed. Nehru foresaw the danger early enough. He told Wavell on July 14, 1945, that “some of the Congress Hindus were anti-Muslim and that the psychological factors were important” (TOP, Volume 5, pages ). This fitted Patel to perfection. For all his claims to fairness, the communalist in him could never be concealed..."

On the other hand, Phadke writes in 'Nathuramayan':

(...After reading multiple volumes of Sardar Patel's personal correspondence one does not find concrete evidence to say that Sardar Patel was against Muslim or was a communal Hindu...)


This is hard to believe.

Noorani gives example after example of Patel's alleged 'communalism' by quoting primary sources while Phadke says he can't find anything solid to support that claim!

I wonder if Phadke and Noorani, both  based in Mumbai, ever met. Phadke died in January 2008. Therefore, I also wonder if he got to read Noorani's book on Savarkar.

Where does the truth lie?  Has any one from Maharashtra tried to counter the charges of Noorani against Patel and Savarkar?

Why has this to be stated for a staunch follower of Mahatma Gandhi? Does one say this about another devout Hindu and Gandhi's follower like Vinoba Bhave (विनोबा भावे)? Mr. Patel would not have certainly liked this 'certification'!

This claim is not much different than that of Mr. Advani.

But all this rhetoric does not even begin to address the serious issues raised by Mr. Noorani about Mr. Patel and Mr. Savarkar.