(Warning: In this post, I have quoted from Wendy Doniger’s book 'The Hindus: An Alternative History'...The book has been withdrawn from the Indian market by its publisher Penguin India in February 2014)

"This suttee, or the immolation of women on the funeral pyre of their husbands, was never widespread. But rare instances continued to occur among the upper classes. Probably the practice was brought to India originally by the Scytho-Tartars, among whom the custom prevailed of vassals and liegemen killing themselves on the death of their lord. In early Sanskrit literature the suttee custom is denounced. Akbar tried hard to stop it, and the Marathas also were opposed to it."

"To return to my central metaphor, once you’ve seen the rabbit (or hare) in the moon, it’s hard to see the man anymore, but the double vision is what we should strive for. This means that when we consider, for instance, the burning of living women on the pyres of their dead husbands (which we call suttee, to distinguish it from the woman who commits the act, a woman whom the Hindus call a sati), we must try to see their rabbit, to see the reasons why some Hindus thought (and some continue to think) that it is a good idea for some women to burn themselves to death on their husbands’ funeral pyres, while other Hindus strongly disagree. On the other hand, we cannot, and need not, stop seeing our American man (or, perhaps, woman) in the moon: the reasons why many Americans think that suttee is not a good idea at all. The philosopher Ludwig Wittgenstein pointed out that the image of a duck-rabbit (also, actually, a duck-hare) was either a rather smug rabbit or a rather droopy duck but could not be both at once. But this is precisely the goal that a non-Hindu should have in studying Hinduism: to see in the moon both our man and their rabbit."

“…particularly in Bengal, suttee was sordid and cruel…in nine cases out of ten, the woman in Bengal went to the flames in fear and horror…she was usually tied to the corpse, often already putrid; men stood by with poles to push her back in case the bonds should burn through and victim, scorched and maimed, should struggle free…”

"Lord William Bentinck...led this drive to westernise. He banned suttee, the burning of Hindu widows —which Europeans sometimes attended as a spectacle, like the animal fights which rajahs staged for them."

Every kid in India (and England) once was taught that Lord William Bentinck, with the help of  Raja Ram Mohan Roy, was responsible for abolishing the tradition of suttee in India.

Historian John Keay has an interesting take on the subject:

"...With Lord William Bentinck, an Evangelical sympathiser, as governor-general (1828–35) a start was made on India’s ‘reformation’ with legislation to outlaw practices like widow-burning (sati, suttee) and ritualised highway killing (thagi, thuggee). Neither was particularly common, nor were they in any sense central or peculiar to Hindu orthodoxy. The effect of legislating against them, whilst it probably saved some lives, was principally to stigmatise Hinduism as indeed abominable to Christian consciences. Although Indian converts to Christianity were few and although Indians were shielded from the worst tirades of Evangelicalism, its assertive new ideology gained a degree of acceptance amongst the British in India. Their rule itself became increasingly imbued with a sense of divine mission, their earlier toleration and even support of Indian religions evaporated, their conviction of Christianity’s moral superiority grew, and their solicitude for the taboos of their subjects was eroded by carelessness and ignorance. When an ambitious army chaplain or a well-meaning subaltern favoured the sepoys under his command with a homily on ‘Christian values’, they might once have indulged him. Now, apprised of a rumoured conversion or smarting under a caste affront, they fidgeted with apprehension..."

Ms. Doniger is more severe on the British than this:

"...The British law probably facilitated more women’s deaths than it saved, and its main effect was to stigmatize Hinduism as an abomination in Christian eyes. Suttee is a pornographic image, the torture of a woman by fire, hot in every sense of the word. Relatively few women died that way, in contrast with the hundreds, even thousands who died every day of starvation and malnutrition, but suttee had PR value. Thus the Raj had it both ways, boasting both that it did not interfere with other people’s religions and that it defended human rights. The debate, in both India and Britain, turned what had been an exceptional practice into a symbol of the oppression of all Indian women and the moral bankruptcy of Hinduism. Nor did the 1829 law, or, for that matter, the new legislation enacted by India after its Independence put an end to it; at least forty widows have burned since 1947, most of them largely ignored until the suttee of Rup Kanwar in 1987 became a cause célèbre, and some even now attested only in obscure local archives."

A woman going suttee was considered almost a goddess. To create publicity stunt, theatre company who was staging the play started bringing a few ladies from the audience on to the stage to worship Ramabai !

Soon the scene became so popular that it alone would last for a couple of hours! People used to forget that the actor playing Ramabai was a male – Vishnu Vatave (विष्णु वाटवे) ! People took home suttee’s 'prashad' (like flowers, wheat/rice grains, vermillion/ turmeric etc.) from the stage the way the people must have taken it in real life in November 1772!

None other than Richard Wagner,  one of the greatest Western classical music composers, did it in his opera Götterdämmerung, 1876 !

"...Richard Wagner staged suttee in his opera Götterdämmerung by having his heroine, Brünnhilde, ride her horse onto the flaming pyre of her beloved Siegfried.  In an early draft of the opera (summer of 1856), Brünnhilde spouts a kind of garbled Vedanta (via the philosopher Schopenhauer, who had read Indian philosophy in German): “I leave the Land of Desire, I flee the Land of Illusion forever; I close behind me the open door of eternal Becoming. . . . Freed from rebirth, everything eternal . . . I saw the world end.”  Thus some Europeans glorified the custom of suttee."

This is just one example. One can learn about more such from Doniger's book. 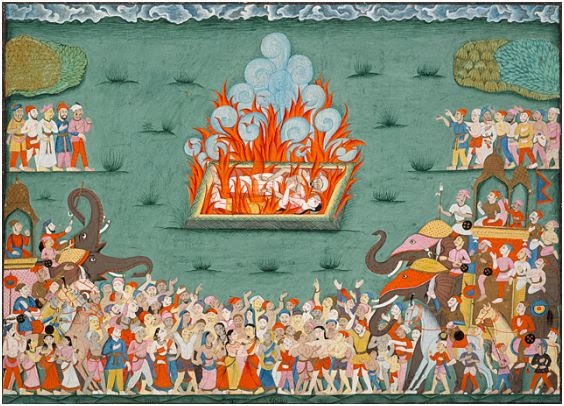 After the picture above was posted on FB page of Bharat Itihas Samshodhak Mandal, Pune in October 2013 by Pratish Khedekar,  there was this comment:

"the position of Ramabai is very interesting, traditionally the sati immolates herself seated with husbands body draped over her lap"

In the picture above Ramabai is shown lying next to her dead husband's body and not carrying his head in his lap.

"the Atharva Veda regards the practice of the wife’s lying down beside her dead husband (but perhaps then getting up again) as an ancient custom. On the other hand, women in the Vedic period may have performed a purely symbolic suicide on their husbands’ graves, which was later (hindsight alert!) cited as scriptural support for the actual self-immolation of widows on their husbands’ pyres called suttee." ('The Hindus / An Alternative History', 2009)

Was the artist perhaps depicting the scene of suttee as was perceived in the Atharva Veda? Just a symbolic suicide?