Look at the picture below.

Joy in the room is infectious. I too started smiling.

They are not ordinary people. They are Marathi speaking Masters of the Universe (MMU). Naturally, they are based in center of the universe: US of A.

It wasn’t easy. But MMU did it. They won and now have projected their prize- All India Marathi Literary Meet अ भा म साहित्य संमेलन -on to the moon. India’s moon mission must have witnessed it from the close quarters.

Or are MMU catching reflection of their crowning glory that had already reached the moon via America's space missions?

Like every thing MMU have done to possess what they do in their personal lives, they pursued this matter until they laid their hands on the 'grand prize'.

Notice the lady, serene like Kausalya. She is reading out Rama’s story to her healthy and cute looking son named Ram.

Notice how Ram is trying to sit in Vajrasana. Notice his expensive pair of Nike. Do you know he speaks Marathi better than many back home? He knows his epics better than his Desi cousin! Do you know he recites Sanskrit Shlokas every second Saturday and fourth Sunday of a month? Do you know Kausalya writes a weekly column for a popular Marathi daily whose editor, by the way, will be attending the meet and staying with Ram's family?

Therefore, when he grows up, Ram is likely to protect the ‘Marathi' culture far more effectively than his poor, disease-prone cousins back home. That is the reason his father follows his religion more vigorously than he ever did in India, donates to “religious" organizations back home and supports self-styled stone-toting “culture protectors” of Maharashtra... 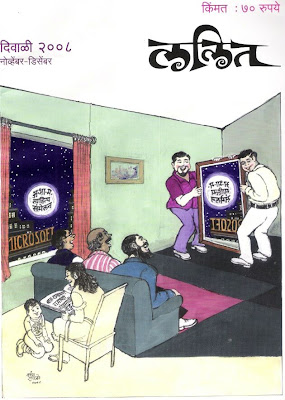