"So, a new generation of women will not have access to critical government studies that would otherwise confirm the overwhelming evidence of the health problems associated with silicone implants. Why is it always women who are treated as guinea pigs and their bodies like lab rats'? I guess because there is a cultural assumption, which, in effect, the UK government deployed last week in public, that women deserve no accountability, especially if you can blame the issue on their "vanity"."

"after almost fifty years since her death, Marilyn Monroe has been named the Top Beach Body Of All Time.

The Hollywood actress beat ultra-slim stars including Kate Moss, Victoria Beckham and Miranda Kerr to the title, suggesting that the nation's obsession with size zero might be on the decline...

...Debenhams, which commissioned the survey, now predicts a trend towards the fuller figure and last season it reported a 58 per cent increase in sales of bust-boosting bikinis.

Sasha Nagalingham, a spokesperson for the store said: 'With the average cup size of the list going from a C to a D in just one year, they are proof that a voluptuous figure is even more desirable that ever before."

"The breasts are...an external symbol of a woman's gender, and we need and want that affirmation,"

"...At one conference, Alex Kuczynski recalls a sales rep explaining that women prefer the breast implants that look the most rounded, the most unrealistic: ”’I don’t know why, but they like the fake shape,’ the salesman says, bouncing a breast implant in his hand. It makes gentle thwack-thwack noises as it lands, bonds briefly with his sweaty palm, and lifts up with a slight sucking noise.”..."

"Naomi Wolf argued that because appearance matters so much for their success — in work, love and almost everything else — women were sacrificing the gains of feminist liberation on the altar of breast implants and doomed diets."

"This year one of the most popular gifts for many young women is a bra that makes your breasts look two cup sizes bigger by pushing them up and out and together at the same time. The bra, which costs about $60, is, my teenaged daughter assures me, something that will change her life.

Why, I ask my daughter, are she and her friends so obsessed with the size and the shape of their breasts? Does it really make them feel like better people to push and pull and pad their breasts into a shape that resembles Pamela Anderson’s first set of implants?
Why, my daughter asks, would I think that she and her friends are somehow free of being judged on their appearance? Why do people always assume that things are better for women just because they have the vote or go to college? It’s clear that there is so much more pressure on young women—especially girls like her—than ever."

The late Dev Anand was asked in year 2008: "You always used to cast beautiful actresses. Who among the present lot do you find beautiful?"

He answered: "Nobody really. All the girls today are too bold. Take a look at two of their pictures and there is nothing more left to see. A girl is beautiful only if she is innocent and vulnerable. Hasn't all that innocence and vulnerability evaporated? They wear coloured contact lenses. God, if I was acting in today's films and had to kiss an actress on her eyes, I would be turned off."

My favourite Hindi film journalist the late Devyani Chaubal (1942-1995) (देवयानी चौबळ)- and we have not had any one even close to her since- once wrote, rather naughtily and in jest, that Raj Kapoor cried in an emotional scene in Dastan (1950) because his leading lady Suraiya had stuffed her blouse with onions!

I guess silicone is not pungent at all and hence today's male actors need lots of glycerine.

It is half a century since silicone breast enlargement became available. It's still the most popular cosmetic-surgery procedure in the US and the UK. 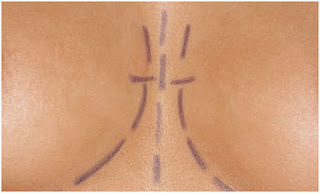 India is very prominent on that world map.

"...a survey by the International Society of Aesthetic Plastic Surgery (ISAPS) points out that there were 51,000 breast augmentation surgeries in India in 2010, the seventh highest in the world. The cost of implanting a pair of silicone gel cups in India could go up to Rs 1.3 lakh, depending on the hospital and surgeon involved and the quality of the product. The ISAPS survey adds that while the average surgeon’s fee for breast implants is $3,629 in the US, in India it’s a competitive $2,405.

"...The 50-year history of breast implants had begun, a history of controversy and success. What no one knew back then was just how phenomenally popular breast augmentation surgery would become – the last available figures from the American Society for Aesthetic Plastic Surgery show it was the most popular form of cosmetic surgery in the US in 2010, with 318,123 augmentations performed...It's estimated between 5 and 10 million women worldwide have had the surgery, many for cosmetic reasons..."

And things have not always gone smooth...There have been complications...such as faulty implants. 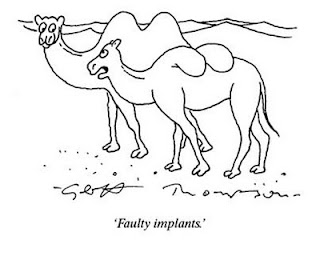 Artist: Geoff Thompson, The Spectator, January 2012
Posted by Aniruddha G. Kulkarni at 9:00 AM No comments: Links to this post