Quite a few of his stories are allegorical- an extended metaphor wherein a story illustrates an important attribute of the subject.

A character is his short story says:

("...hey, instead of creating changing metaphors for stupid, gross world, if the world started changing to suit your metaphors, tell me what more you want.")

("...ditch it, I never use sentences pierced by half trunks of thousands of humans, like rags which have been used to wipe asses by thousands! I want words jaunty like new coins, I want a sentence like an edge of newly sharpened knife- spotless, alive.")

Just count the number of metaphors in the quote above!

"Metaphor is crucial to the way the brain works. Is it also dangerous?

...Metaphor works, most obviously, when we recognize a similarity between two different things. It is a matter of "pattern recognition," which may be more important in the working of the brain than logic. "Early human thought proceeded by metaphor," according to Nobel Prize-winning neurobiologist Gerald Edelman. And this imprecise sort of figurative thinking is "a major source of imagination and creativity in adult life."...

...For Aristotle, a command of metaphor was "the mark of genius, for to make good metaphors implies an eye for resemblances." The psych-lab linguists can pump the primes all they like, but the proper use of figurative language may well remain an art rather than a science."

GA would have been glad to know! 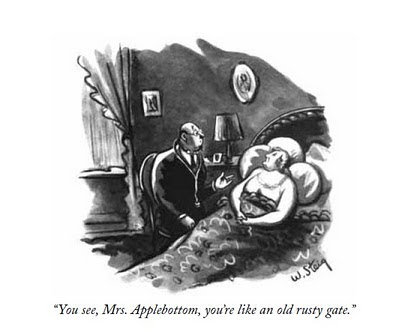 (Almost eighty years later, Mr. Steig is as funny as he always was.)

p.s. This is one metaphor- 'old rusty gate'- that one day I'll be eligible for!
Posted by Aniruddha G. Kulkarni at 9:00 AM No comments: Links to this post