Not Just Larger Pair of Underpants

Anorexia is sweeping young female India. I watch a Hindi film, from even 1990’s, and I feel female lead is fat.

Is fat so bad or ugly?

“For years, health experts have been warning that Americans are too fat, that we exercise too little and eat too much, that our health is in jeopardy.

Some fat people beg to differ.

Blogs written by fat people — and it’s fine to use the word, they say — have multiplied in recent months, filling a virtual soapbox known as the fatosphere, where bloggers calling for fat acceptance challenge just about everything conventional medical wisdom has to say about obesity.

Smart, sassy and irreverent, bloggers with names like Big Fat Deal, FatChicksRule and Fatgrrl (“Now with 50 percent more fat!”) buck anti-obesity sentiment. They celebrate their full figures and call on readers to accept their bodies, quit dieting and get on with life.

The message from the fatosphere is not just that big is beautiful. Many of the bloggers dismiss the “obesity epidemic” as hysteria. They argue that Americans are not that much larger than they used to be and that being fat in and of itself is not necessarily bad for you.

And they reject a core belief that many Americans, including overweight ones, hold dear: that all a fat person needs to do to be thin is exercise more and eat less. ..

… The bloggers argue that changes in definitions over time, along with flaws in the body mass index formula, have pushed more Americans into the “fat” and “obese” categories, and they point to provocative studies suggesting that there may be benefits to being overweight, including a large study that found that underweight Americans are more likely to die than those who are moderately overweight.

Several other recent studies on heart patients and dialysis patients have also reported higher survival rates among heavier patients, suggesting that the link between body size and health may be more complex than generally acknowledged. Another study of people over 60 found that being fit has more bearing on longevity than simply being thin.

The bloggers’ main contention is that being fat is not a result of moral failure or a character flaw, or of gluttony, sloth or a lack of willpower. Diets often boomerang, they say; indeed, numerous long-term studies have found that even though dieters are often able to lose weight in the short term, they almost always regain the lost pounds over the next few years.

Ultimately, these bloggers argue, being skinny may have far more to do with the luck of the genetic draw than with lifestyle choices…”

Fat may or may not be bad or ugly during one’s lifetime but it could be a problem after one’s death.

“More than two-thirds of Australians living outside major cities are overweight or obese, and extremely obese corpses are creating a safety hazard at mortuaries…

…In the past year, there have also been requests for larger crematorium furnaces, bigger grave plots as well as super-sized ambulances, wheelchairs and hospital beds.” 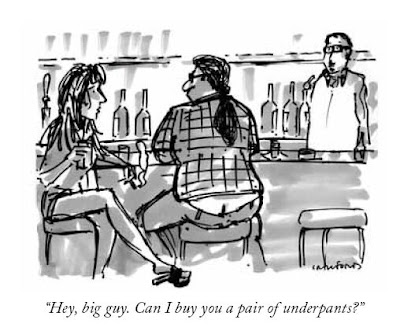 Artist: Michael Crawford The New Yorker 18 May 1998
Posted by Aniruddha G. Kulkarni at 5:30 AM 2 comments: Links to this post