Bill for These Things Are Coming. Big Time.

Americans can poke fun at their armed forces without looking over their shoulders.

Indians are not that lucky. One is a traitor if he does so.

Therefore, if you are not the one who starts waving Indian national flag on hearing the word military, you should read Praful Bidwai’s “Military overdrive” (Frontline, April 11 2008).

At our Miraj home, we had a large poster of army recruitment pasted on a wall. I still remember the caps and the shoes from that poster. One of my most favourite figurines was that of an Indian G I.

Bofors scandal changed all that.

And more came by. Most men from military I met- both serving and retired- had many accounts of corruption to tell.

I realized that Indian defence establishment was no different than Indian police. It was just much bigger and richer.

“…military spending will probably turn out to be Rs.140,000 crore or even higher, of the same size as India’s entire combined public spending on health and education.

This is surely unconscionable. A society that spends such a huge proportion of its scarce resources on the military when it cannot even feed all its people or overcome the chronic malnutrition prevalent among half its children is very, very sick. Its pathology is all the more troubling on account of three factors…

… there is rampant corruption in the armed services. The numerous recently reported scams are probably the tip of the iceberg. Bribes are apparently exchanged for all manner of things – purchase of everything from eggs to airplanes, under-supply of vitally necessary material (for instance, nutritious high-energy meals or snow jackets in Siachen), in the ordering of inappropriate or low-value equipment, and diversion of funds from sanctioned and legitimate activities (for instance, counter-insurgency operations) to unnecessary or questionable procurement (for instance, buying freezers and chapatti-making plants).

Corruption is not unique to the armed forces but thrives in them because of a lack of public oversight and accountability. These factors alone explain why the DRDO gets away, and indeed is rewarded, with a budget of Rs.3,400 crore despite its failure to complete any of its major projects in time; why the Indian Air Force has lost over 200 aircraft in accidents within a decade; why the Army in the 1980s procured supposedly new combat engineering tractors, only to discover that they were second-hand British rejects; and why the Navy went in for the USS Trenton – which the Comptroller and Auditor General says, is a lemon, a 37-year-old ship, which has already outlived its service life – without “proper physical assessment” and technical evaluation of its seaworthiness.

The armed forces and the Defence Ministry are in dire need of reform and accountability. Even minor improvements in their functioning will save the nation tens of thousands of crores. Many years ago, the Arun Singh Committee, appointed to examine the scope for cost-cutting in the Army, reportedly concluded that a 15 per cent reduction was achievable without loss of effectiveness. The government must release its report and have it widely debated so that an independent and objective assessment can be made of what is achievable today.

We simply cannot afford to have unaccountable agencies burning up Rs.140,000 crore of public money year after year. Lack of oversight and proper auditing is not merely undesirable in itself. It is an affront to the spirit of democracy.” 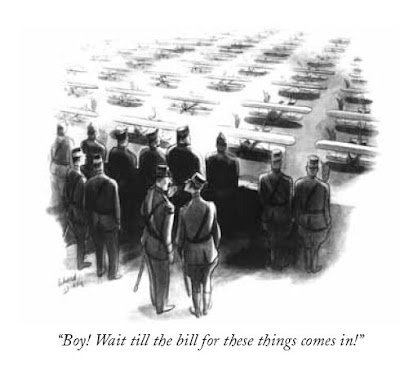 Artist: Richard Decker The New Yorker 7 November 1931
Posted by Aniruddha G. Kulkarni at 9:00 AM No comments: Links to this post