"At 425,000 barrels a day, Iran is India's second biggest crude oil supplier. And India is one of the largest foreign investors in Iran's oil and gas industry. The bilateral oil trade is worth $12 billion annually."
A.G. NOORANI, Frontline, March 23 2012:"After 1947 the links with Central Asia weakened. Right now they are extinct.".

"I have always thought of Faiz as a difficult writer for Indians because of his classical vocabulary. When I complained about this, the great Pakistani actor Zia Mohyeddin wrote to me to say that he found it difficult to believe that Indians couldn’t even understand basic Persian words that had been around since the time of Mir."
Wikipedia:

"Although Mirza Ghalib himself was far prouder of his poetic achievements in Persian, he is today more famous for his Urdu ghazals."

How important was once Farsi/Persian in India? Short answer- as important as English today is! (Read little more on this subject here.)

Ghalib is the greatest Urdu poet ever but he would have liked to achieve that status in Persian/Farsi!

("if you wish to experience the real juice of my poetry then read my Farsi poetry; why read juiceless Urdu poetry")

However, during Ghalib's own lifetime (1797-1869), Urdu's importance at Mughal court was on ascendency as Farsi's importance steadily declined.

For me, it's too expensive- anything more than 'Bata' Rs. 999 usually is- for my budget but my young friend and fellow Mirajite Nikhil Bellarykar (निखिल बेल्लारीकर) has already bought it and has enthusiastically given me his take on it after partial reading of it. I will not disclose that take now but will wait for his final version.

My current experience with most 20th century Marathi writing on Shivaji's life is the lack of adequate language skills among authors.

I am fascinated by many aspects of Shivaji's life but above all his command of languages.

I was first impressed with his Marathi language skills, in his order-letters (आज्ञापत्रे), addressed to army, that were included in our school text books.

Paul Krugman expects good historian "...to be a person unafraid of offering theories as well as facts, and therefore of saying things that might turn out to be wrong."

The essay is about a famous Farsi letter sent by Shivaji-maharaj (scribe-Munshi Nil Prabhu) (मुन्शी नील प्रभु) to Mughal Emperor Aurangzeb circa 1664-65. (The original letter apparently as of 1972 was in the library of Royal Asiatic Society, London but the essay is based on a true copy of it.)

Shivaji's irresistible personality, says Godse, is reflected in the letter. They clearly are his words and not that of his clerk, however smart he might have been. 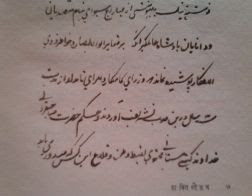 start of the letter

Godse proves how badly the letter had been translated until then by a number of historians like Jadunath Sarkar, Riyasatkar Sardesai (रियासतकार सरदेसाई), Babasaheb Purandare (बाबासाहेब पुरंदरे). He argues that they had deprived us of a great thing of beauty.

And then he goes on to translate it himself with the help of Farsi experts. (by the way Farsi/Persian is not an alien language to even someone like me because it was regularly taught at Miraj High School as an optional language, the way Sanskrit was, when I was a student there. I still remember teacher's name- Mr. Pathan. And also the fact that sadly only Muslim students used to opt for it.)

The letter has such literary qualities that it needed great sensitivity and deep knowledge of Farsi to translate it.

Godse claims: Some Farsi experts say that Shivaji, in the letter, has quoted a few lines from old Farsi poetry, most likely from Shahnameh. 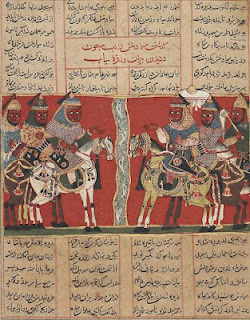 A page from a Shahnama manuscript, from around 1425

Over the past year or so, I got to know a little bit about Shahnameh. (I plan to buy 'Shahnameh: The Persian Book of Kings' by Abolqasem Ferdowsi, Dick Davis, Azar Nafisi some day in future.)

As per Wikipedia, Shah-nama (Persian: شاهنامه) is: "a long epic poem written by the Persian poet Ferdowsi between c.977 and 1010 AD...the Shahnameh tells mainly the mythical and to some extent the historical past of (Greater) Iran from the creation of the world until the Islamic conquest of Persia in the 7th century..."

Peter Brown writes about the book in The New York Times, December 8, 2011 'On the Magic Carpet of the Met':

"...It should not be dismissed as an elegant fairy tale. The deeds of shahs from centuries before Islam were treated as timeless paradigms for just rule. The message of the Shahnama was all the more powerful because it spoke about a dream time before the coming of Muhammad. The ideals in it stood for something wider than the wish of the believers of one religion alone. They summed up the natural, almost cosmic, yearning of humanity as a whole for order, peace, and justice. When a painter produced a copy of Firdausi’s Book of Kings for the court of the Mongol ruler of Iran—the Ilkhanid Abu Sa‘id (ruled 1317–1335)—he showed the burial of one of the primeval kings of Iran, preceded by a stallion bearing a reversed saddle in the style of a Mongol funeral. In doing this, the artist did more than add a touch of local color. He was attempting to hold a newly Islamized ruler of uncertain temper to codes of justice that were rooted in the depths of time..."

I thought the quote above explains Shivaji's genius in quoting from 'Shahnama—the Book of Kings'.

Was Shivaji reminding the Emperor Aurangzeb- then arguably the most powerful ruler in the world and religious fanatic- about the world before Islam- "a dream time before the coming of Muhammad", "the ideals that stood for something wider than the wish of the believers of one religion alone" and "the natural, almost cosmic, yearning of humanity as a whole for order, peace, and justice"?

If so, I am stunned by the gravitas, finesse and sheer audacity of a 35-year old native Marathi speaker.

I just wonder what would have been spoken when the letter was read out to the emperor.

Some of the best writing on Shivaji has been done by Samarth Ramdas (समर्थ रामदास). This is how Samarth remembered Shivaji to Shivaji's son:

The bold line above says: How Shivaji spoke...Not just Marathi but also Farsi!

[p.s. Shivaji has used the word 'watan' (वतन) five times in the letter. It indeed is such a moving word. Just think of the Hindi songs having it: 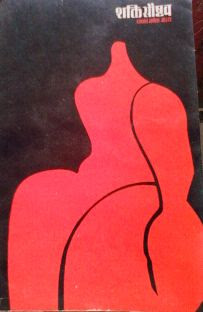 Combine one word each from 'Shakti' and 'Saushthav' and you have a beauty on hand- for instance charm of vigour or swiftness of force or elegance of strength...

Now, look at the picture. Isn't it a wonderful embodiment of “Shakti Saushthav”?

Godse argues in his gem of a book that the 17th century Maharashtra- its Marathi literature including Bhakti, its architecture, its sculptures, its folk art, its music, its most beloved ruler- was principally characterised by 'Shakti Saushthav'...Godse-sir, I remain in an eternal debt.

p.s Nikhil Bellarykar informs me that historian Gajanan Mehendale dismisses that the letter discussed here is not authentic. This does not much change Godse's basic contentions: Likely expertise of Shivaji in the language of diplomacy of his period- Farsi and manifestation of 'Shakti Saushthav' in 17th century Maharashtra.
Posted by Aniruddha G. Kulkarni at 9:00 AM 2 comments: Links to this post