It’s worth reading in its entirety. It sums up degeneration of Maharashtra leadership- both social and political.

It talks about democracy becoming just a formality because of caste, money, power and gundaism. It narrates number of instances where blatant violence was used by major political parties to silence the dissenting voice and how the administration did nothing.

It reminds the minister that the Indian Constitution declares scientific temperament as a fundamental duty of all citizens. The letters asks why the Maharashtra Eradication of Black Magic and Evil and Aghori Practices Bill, 2005 took such a long time to progress to its current stage. (btw- The State Government has sought suggestions from public on the bill by 30th August 2007) Read more on the bill here.

I wonder where the minister and his cabinet colleagues stand on the issue of superstition personally. Most of them are seen wearing amulets,stones, rings, threads, chains and what-have-you. 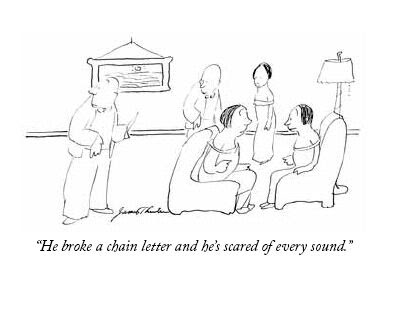 Artist: James Thurber The New Yorker June 1, 1935
Posted by Aniruddha G. Kulkarni at 7:37 PM No comments: Links to this post

Unless the bridges get blown up by helpful terrorists……..

Just one bridge fell in Minneapolis and people in US are talking about health of the most of the bridges in that country.

“Federal officials have admitted that as many as 70,000 bridges across the US - representing 12 per cent of all bridges in the country - had recently been rated structurally deficient. According to the American Society of Civil Engineers, the US would need to spend $9.4bn annually for the next 20 years to address all the problems with its aging bridges."

Garrison Keillor writes: “…Bridges are not supposed to fall down unless there is an earthquake. People die in violent storms, plane crashes, epidemics, but a person is supposed to be able to drive home on a summer evening and cross a river on a steel truss bridge and not find himself plunging headlong into the abyss…..
Unless the bridges get blown up by helpful terrorists, making us eligible for Halliburton to come in and rebuild them, I don't imagine that much will happen. There will be an investigation and someday, when we are much older, we will learn that the bridge collapsed due to a unique set of circumstances that could not have been predicted by anybody. Nobody had sex with that woman. Everybody was doing a heckuva job….”

NYT editorial (Aug 11,2007) says: “In its last state inspection, the Brooklyn Bridge rated 2.9 on a scale of 7, an unabashed poor rating, barely passing. It was not bad enough to close it or further limit traffic and city officials pronounce the bridge safe, but New Yorkers should be excused if they begin looking at the 124-year-old landmark in a different way.

Those who live in its magnificent shadow are in the same uneasy place as the millions of other Americans who traverse bridges daily. Many, in inspections prompted by the Minneapolis disaster, have been found to have structural, design or maintenance problems. ……”

I wonder what ratings bridges in India would get. We of course have digested bridge falls as easily as neighbourhood water logging during monsoons. Jaane-Bhi-Do-Yaro (1983), one of our all time great feature films, carries a backdrop of a bridge fall in Mumbai.

A fallen bridge always reminds me of “The Bridge on the River Kwai”. One of the most moving scenes is when on the eve of the blast Colonel Nicholson (Alec Guinness) reminisces his days in India. He says he helped build railway bridges all over India.

Regardless of their ratings most of them stand today. 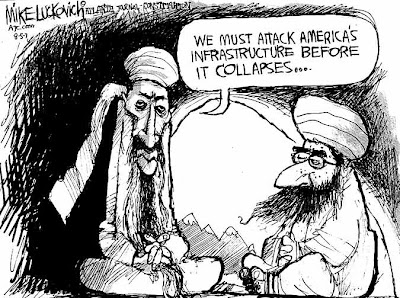 Artist: Mike Luckovich
Posted by Aniruddha G. Kulkarni at 11:41 AM No comments: Links to this post