Indian government until August 22 2011 to the supporters of The Jan Lokpal Bill and middle-class people in general... 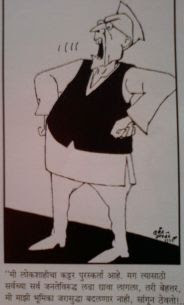 (I am an ardent supporter of democracy. And for that if I have to fight the entire populace, I could not care less, I will not change my stance even one bit, I am telling you!...")

This was published in one of the best Marathi periodicals- despite its soft(?) Hindutva bent- of all time - 'Manoos' (माणूस).

Political cartoons of Sarwate that were published in Manoos from 1969-1972 tell us more about Indian democracy as practised in Maharashtra than any history book. Particularly see his cartoon on hunting expedition of the then chief minister Vasantrao Naik (वसंतराव नाईक).

This collection proves how in the field of political cartoons Sarwate is equal to the likes of Abu Abraham and R K Laxman. And if you add the rest of his repertoire to it, he is better than both.

We at Miraj used to get Manoos for a long time by post. I used to pounce on it. I still remember many things from it- Sadanand Borse's (सदानंद बोरसे) reviews of films for instance. My father and my brother both were handsome contributors to its contents over a number of years.

Like almost all good Marathi periodicals, it died long time ago...
Posted by Aniruddha G. Kulkarni at 8:17 AM 2 comments: Links to this post