"Earlier, people looked at caste only at the time of marriage. Now caste is not relevant at marriage, but it is prominent all the time. This malady exists at the highest levels.... Reservations are still with us though they were meant to be transitory. All this shows that we have not been able to integrate society. We see national integration only when there is a national calamity..."

"Our governance structures are also hemmed in by our sociology and culture. In 19th-century Europe (as in Mao’s China) the state took a leading initiative in spreading mass education and health services. In contrast, our elite is relatively callous about these basic needs of the poor; this may be a reflection of traditional elite disdain for the lower classes and castes. But even when the latter come to power, the issue of basic social services gets low priority in comparison with larger symbolic issues of dignity politics (particularly in North India). A perceived slight in the speech of a higher-caste political leader resented by a lower-caste one will usually cause much more of an uproar than if the same leader’s policy neglect keeps hundreds of thousands of children severely malnourished in the same lower caste. The issue of job reservation for backward castes catches the public imagination more fervently than that of child mortality or school dropouts that afflict the majority in those communities. Thus the demand from below for those basic social services is as inarticulate as their supply from above is deficient."

I was just browsing "CASTE, ITS TWENTIETH CENTURY AVATAR", 1996 edited and introduced by the one and only the late M N Srinivas.

The best place to start reading the book is the back cover of the book.

It has this brilliant cartoon by the late Abu Abraham: 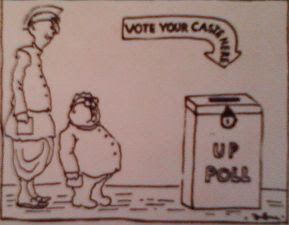 I would make just one change to it in 2011. Remove the word 'UP' from the ballot box.

(p.s I think it was Abu who created the word play on caste / cast that has now so pervasive.)

There is a brilliant cartoon by Sudhir Tailang in today's The Asian Age on how the film "Aarakshan" was reserved for different categories!
Posted by Aniruddha G. Kulkarni at 9:00 AM No comments: Links to this post