Not simply That sort of thing

Organized religion is doing well for itself outside Europe.

In India it is more visible, noisier, more violent, more conservative. Queues outside temples get longer and wealthier. Superstars and sport-stars make headlines not just for their sex lives, income tax problems and political connections but also for their religiosity.

Scientist Jayant Narlikar observed wryly how young people consult horoscopes before finalizing their marriage though their parents or grandparents may not have done so for their own. More educated people think astrology is a science just like astronomy. Probably more exact. TV Programs on astrology have far higher TRP's than those on science.

Jagdish Bhagwati in Oct 2006: "I was actually surprised with the Hindu ceremony (at a public function where Bhagwati lectured on October 18), with all this pujas , Sanskrit slokas and lighting the lamp. Of course, I know it's Diwali; but it was a Hindu ceremony throughout. And I was a bit horrified. I am used to Gandhiji's way of doing things - little bits from the Koran, the Bible, and the Gita and Zoroastrian texts. Nobody even thought about it. They were all busy lighting lamps with Sanskrit slokas going on and invoking Lakshmi, the Goddess of wealth. I mean, Goddess Lakshmi and Ganesh are Hindu things. They were supremely oblivious of the fact that some Muslim or Parsi might not appreciate it, much as they might be tolerant. This is our culture. But our culture is more broad-based than just Hinduism."

When Indians talk it is always “fate” and never “luck” or “chance”. And fate is what is decided by either stars or is pre-determined at the time of birth.

How about religious institutions like Shankaracharya or Roman Catholic Church? They always don’t seem to be doing as well. There was a big controversy about Kanchi Shankaracharya in 2004 when he was accused and arrested of murder charge. Church’s biggest problem seems to be not Osama but sex scandals. 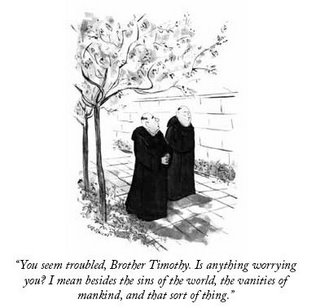 Is Timothy 2007, who in picture above looks so pious, a paedophile and is worried about pending internal enquiry? After all it surely cannot be dismissed as lightly as “that sort of thing”. 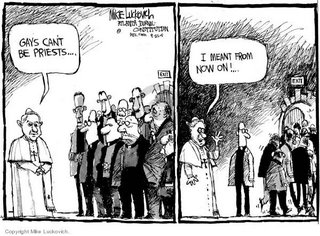 One thing that surely should be said in favour of exiting priests is – they all are honest about their past. How many of us can claim that?

Nothing personal. Just want to kill you.

When you hear it, one can be sure massive bloodshed is around. It takes away any personal responsibility from an individual and assigns it to something abstract.

Marlon Brando “ ….if the Mafia had been black or socialist, Corleone would have been dead or in jail. But because the Mafia patterned itself so closely on the corporation, and dealt in a hard-nosed way with money, and with politics, it prospered. The Mafia is so…American. To me a key phrase in the story is that whenever they wanted to kill somebody it was a matter of policy. Just before pulling the trigger they told him: “Just business. Nothing personal”. When I read that, McNamara, Johnson, and Rusk flashed before my eyes.” 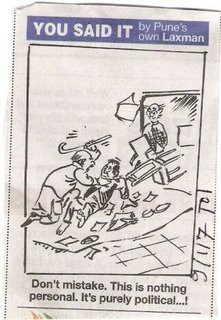 Posted by Aniruddha G. Kulkarni at 10:50 AM No comments: