Filmstar Akshay Kumar said, in a lighter vein, on TV program 'Jhalak Dikhla Jaa', that Sheila of 'Tees Maar Khan' is Sindhi because she herself says: "My name is Sheila, Sheila Ki Jawani"...S K Jawani!

(Surname ending with 'ni'...by that logic I, too, am Sindhi...after meeting me after many years a hostel-mate felt that I looked like an Iranian...So Sindhi is closer home!) 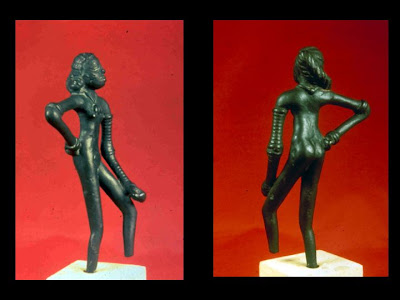 (bronze 'dancing girl' from Mohenjo-daro in Sind, Pakistan c 2000 BC)

She is Sindhi alright! Let us call her Sheila.

This is how- in one of the most moving pieces of prose- historian John Keay describes her in his book 'India: A History', 2000:

Although probably not dancing, the `dancing girl' is unquestionably `a pleasing little thing'. Naked save for a chunky necklace and an assortment of bangles, this minuscule statuette is not of the usual Indian sex symbol, full of breast and wide of hip, but of a slender nymphet happily flaunting puberty with delightful insouciance. Her pose is studiously casual, one spindly arm bent with the hand resting on a déhanché hip, the other dangling so as to brush a slightly raised knee. Slim and attenuated, the legs are slightly parted, and one foot — both are now missing- must have been pointed. She could be absent-mindedly surveying her wardrobe, except that her head is thrown back as if challenging a suitor, and her hair is somehow dressed into a heavy plaited chignon of perilous but intentionally dramatic construction. Decidedly, she wants to be admired; and she might be gratified to know that, four thousand years later, she still is.

[I trust only the late D G Godse (द ग गोडसे) to write stuff comparable to this, or even better than this, on such a subject, in Marathi.]

Here is an example of "the usual Indian sex symbol, full of breast and wide of hip":

Does Ms. Katrina Kaif, below, too belong to the category of "...not of the usual Indian sex symbol, full of breast and wide of hip, but of a slender nymphet"? 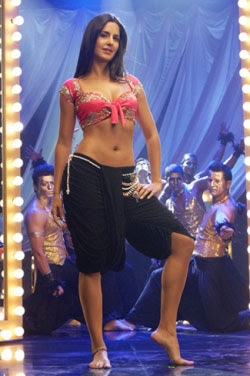 Ladies in the first and the third have a lot in common. But I wonder when Ms. Kaif will get her own John Keay.