Not Happy with Something? Relax. Happiness Adapts

Fleming is seemingly devastated by his boss’s argument. He probably didn’t want to be the first victim of management wisdom. But he is.

Can he still be happy?

“Got a pay hike! Bet you won't be that happy. Research shows that men are happiest with salary rises only if their colleagues get less. Researchers in Europe, who have carried out the study, found that most men get the biggest buzz from a monetary prize when they know it's a much bigger award than that received by someone else, The Independent reported in London on Friday.

According to lead researcher, Professor Armin Falk of Bonn University, the findings go against conventional theories about economic rewards, which "suggest it is the absolute hike in pay, rather than the relative one, that matters most".

"This result clearly contradicts traditional economic theory (which) assumes only important factor is the absolute size of the reward," he was quoted as saying…”

I am surprised that the professor is surprised.

“…A more important point, probably, is that human beings are hard-wired to judge themselves not by their absolute standard of living, but in comparison to others. It may be true that in material terms today's borderline poor live as well as the upper-middle class did a few decades back, but that does not stop them from feeling poor. And consumer spending ultimately disappoints because of habituation: once you have become accustomed to a given standard of living, the thrill is gone…”

Therefore, if Fleming’s colleagues don’t get any raise like him or get a cut or lose their jobs, Fleming may still be happy.

Or Fleming can draw comfort from following:

“…A notorious study in 1974 found that despite some 30 years worth of stellar economic growth, Americans were no happier than they were at the end of World War II. A more recent study found that life satisfaction in China declined between 1994 and 2007, a period in which average real incomes grew by 250 percent.

Happiness, it appears, adapts. It’s true that the rich are happier, on average, than the poor. But while money boosts happiness, the effect doesn’t last. We just become envious of a new, richer set of people than before. Satisfaction soon settles back to its prior level, as we adapt to changed circumstances and set our expectations to a higher level…” (EDUARDO PORTER, NYT, November 12, 2007) 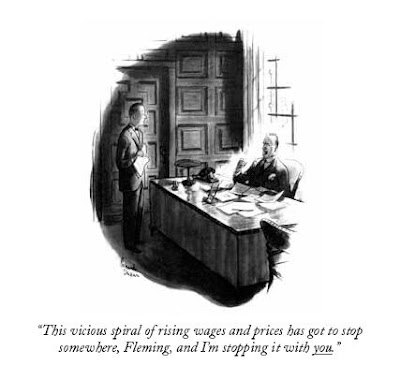 Artist: Richard Decker The New Yorker 20 December 1947
Posted by Aniruddha G. Kulkarni at 9:00 AM No comments: Links to this post