"Anju, how hot have you poured tea? Tongue is torched..." 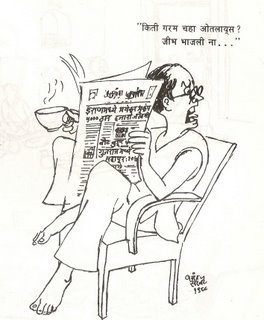 (Open the picture in another browser window to get a clearer view of the news in the Marathi broadsheet* held by HIM.)

* the broadsheet he is reading has these news-items: "A quake in Iran kills 5,000 and injures thousands", "floods in Gujarat killing hundreds", "Boat capsizes" etc!
Posted by Aniruddha G. Kulkarni at 12:43 PM 2 comments: Links to this post

(Govindrao Tembe: "Thers is no courage among our cinema people to do something bold and because of that and that alone they are in terrible shape."

'Enthiran The Robot' was shown on Sony TV on the evening of March 13 2011. I couldn't see it because I wanted to watch the live coverage of the last day of Yonex All England Badminton Championships.

Rajinikanth's (Shivaji Rao Gaekwad, शिवाजीराव गायकवाड) first language is Marathi and he still speaks the language with some relish and certainly much 'better'- for my ears at any rate- than many Marathi 'celebrities'.

Earlier I wrote a post on Marathi films on Dec 18 2007. Read it here Ugh! Marathi Films.

Since then I have seen parts of both 'Mee Shivaji raje Bhosale boltoy' (मी शिवाजी राजे भोसले बोलतोय) and Natrang (नटरंग).

I did not like the former at all and found the latter OK.

I have already quoted following earlier.

Suhas Palshikar: "...preferential treatment to locals is always an easy and attractive policy proposal. What is wrong with it? It is wrong simply because it creates an untenable category of “local”. In administrative parlance it becomes “domicile” – meaning resident for 15 years. This strategy practically abandons diversity. Apart from raising issues of definition of the local, such a policy encourages inbreeding and denies its beneficiaries he advantage of greater exposure and competition. It produces ghettoisation at schools, colleges and at workplaces – resulting in non-diverse social universes –hostels, localities and cities...."

More than anything else, I feel, this ghettoisation affects Marathi culture deeply.

Almost no Marathi cultural program shown on TV is complete without talking about "outsiders". For them, not just Hindi, but any other language or its native speaker is a fair game.

Even the devastating floods of 2009 in North Karnataka- where lacs of Marathi speakers live- were NOT covered in any depth by most Marathi media. (btw- They are covering March 2011 Japanese quakes in great depth!)

Like Vilas Sarang (विलास सारंग) says about Marathi literary world, this Marathi media world too is afflicted with "inbreeding".

As I have said earlier, Namdev is arguably the greatest bilingual Indian writer because apart from his enormous talent, his vision was worldly and heart large. (Where was he domiciled? Maharashtra or Punjab?)

If Marathi has to assert itself on India and the world stage, her 'lovers' need to do some serious re-thinking on how to get there.

Returning to Endhiran, look at the picture below. 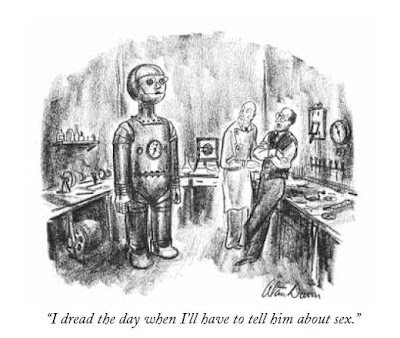 "I dread the day when I'll have to tell him about sex."

Maybe. But what about telling him what happens after the sex?

In Enthiran, like '3 Idiots' in 2009, robot Chitti manages a complex child delivery successfully.


p.s. We as a nation are obsessed with producing babies!
Posted by Aniruddha G. Kulkarni at 9:30 AM 1 comment: Links to this post