For Scientific American November 2010, Amir D. Aczel says: "For years the cosmos and the atom have been at odds with one another. If any physicist can reconcile them, it's Steven Weinberg."

But for me, Weinberg reached an exalted status not because what he may still do in science or his Nobel prize but when I read his this line in one of the greatest pieces of prose I have read:

"...Whatever purposes may be served by rewarding the talented, I have never understood why untalented people deserve less of the world's good things than other people..."

No ism, no right/left, no ideology, no religion, no holy text...I trust only a poet-saint or a sage to write a line of this profundity.

I hope some day a Marathi Vinda (विंदा) will write what happened when Weinberg and Dnyaneshwar (ज्ञानेश्वर) met! [may I suggest a title for the poem:'Gyanya-Weinya Chi Bhet' (ग्यान्या-व्यान्याची भेट)].

And doesn't he look the Rishi/sage part in following lovely picture? 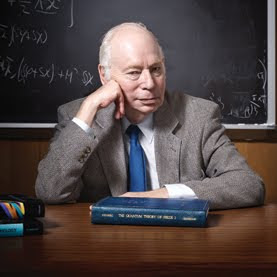