Reuters reported on August 29, 2007:
“Sand storms in northwest China are reducing sections of Great Wall to mounds of dirt and may cause them to disappear in about 20 years, state media said on Wednesday.

The Great Wall, which was chosen last month as top of the new seven wonders of the world, snakes its way across more than 6,400 km (3,980 miles) and receives an estimated 10 million visitors a year.

More than 60 km of the wall in Minqin county in Gansu province, built in the Han Dynasty which lasted from 206 BC to 220 AD, had been rapidly disappearing……….

The Great Wall, which the United Nations listed as a World Heritage Site in 1987, has been rebuilt many times through the centuries, and many sections of it have suffered serious damage from weather erosion and human destruction.”

Death of dinos or a “man-made” destruction, following lines of Shelley’s “Ozymandias” always come to my mind.

“ My name is Ozymandias, King of Kings:
Look on my works, ye mighty, and despair!'
Nothing beside remains. Round the decay
Of that colossal wreck, boundless and bare,
The lone and level sands stretch far away.” 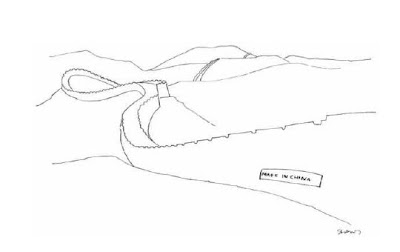