"Like every other writer, Shakespeare will be forgotten sooner or later..."

"When Pakistan was formed, we laughed at that time — Lahore and Bombay are one, how can this be — but it happened.

So who knows, as long as there are humans in this world, miracles are possible.”

"He hugged Nanda and wept inconsolably

After a special screening of Hum Dono (Rangeen), Nanda, a recluse, went to meet him at his office.When the door opened, she looked at him said “Devsaab, pehchana?” Devsaab came towards her, hugged her and started weeping. Nanda left in a few minutes and asked me outside, “Why did he get so emotional?” Later, she told me that they were meeting each other after 48 years, after 1963. Tears kept flowing down his cheeks even after Nanda had left." (The Times of India, December 18 2011)

"...But there is also something about cinema’s essentially modern character that makes it vulnerable to fears of obsolescence. The camera has an uncanny ability to capture the world as it is, to seize events as they happen, and also to conjure visions of the future. But by the time the image reaches the eyes of the viewer, it belongs to the past, taking on the status of something retrieved. As for those bold projections of what is to come, they have a habit of looking quaint as soon as they arrive.
Nostalgia, in other words, is built into moviegoing, which is why moviegoing itself has been, almost from the beginning, the object of nostalgia..."

If so I wonder why Mr. Dev Anand never liked to talk about past or even remember it. After all his art is deeply rooted in nostalgia!

I have really enjoyed and still enjoy watching some of his films:

Like ‘Godfather’ or ‘Casablanca’ or 'Jagte Raho', I can watch a part of 'Baazi' every day.

Seldom in the history of Hindi films more talent came together to make a film than this Navketan venture:

"...Balraj Sahni, a classmate of Chetan in Lahore, was roped in to write the script, plagiarised from the Hollywood film Gilda, starring Rita Hayworth and Glenn Ford. Geeta Bali was to play one of the two lead female roles. The other went to someone fresh out of college, Kalpana Kartik (real name Mona Singha) who was related to Chetan’s wife. She later became Mrs Dev Anand. One of Baazi’s strongest attractions was its catchy music composed by S.D. Burman and sung beautifully by Geeta Roy, soon to become Mrs Guru Dutt. Neither of these two marriages worked, but let us not go into that!
Baazi’s story centres on a seedy gambling club and one of its patrons, played by Dev Anand. It was a dark film made in the film noir style borrowed largely from Warner Brothers’ productions starring, most times, Humphrey Bogart. This short-lived trend in our cinema had begun earlier with Gyan Mukherjee’s Sangram, with Ashok Kumar playing a gangster, and continued with films like Jaal, Aar Paar and CID..."

But for me his finest performance was on TV- his interview on “Rendezvous with Simi Garewal”. I was deeply moved the way he described his relationship with his mother and the hurt caused by her death before he came to Bombay. I thought in a way he never got over his loss. He still missed his mother and he probably never found the real love.

The last Dev Anand starred or directed film I watched was Des Pardes (1978). So for me, even before his death, he had been a memory for almost 33 years.

I don't know what Mr. Anand thought of immortality. But about him, there was a lot of talk about positive thinking, living in the present, fitness regime, frugal eating, company of young people, health checkups in London, working in one's 80's etc.

Considering all this, he would be disappointed with number 88.

In Mr. Anand's case: "in my Bandra penthouse".

For immortality, American futurist Ray Kurzweil proposes not resurrecting the body but instead shedding it altogether and uploading minds into cyberspace. Had the technology been available, I wonder Mr. Anand would have signed up for the program?

I also wonder what he would have thought of John Gray's views on such efforts:

"Freezing our bodies or uploading our minds into a supercomputer will not deliver us from ourselves. Wars and revolutions will disturb our frozen remains, while death will stalk us in cyberspace – also a realm of mortal conflict. Science enlarges what humans can do. It cannot reprieve them from being what they are."

I would like to remember Mr. Anand as a guy who portrayed many enjoyable moments of what we are.

Following cartoon of Sudhir Tailang has appeared in The Asian Age on Dec 5 2011.

I like Mr. Tailang's imagination but I just hope Mr. Anand is making a film from 1950's or 1960's or 1970's. It will be that much better if he gets his younger brother Vijay / Goldie to direct it and he goes in front of the camera. If not, it will be a film made in heaven to be shown in hell as a punishment! 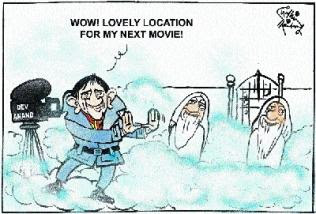