Hockey World Cup and a Tale of Two SSC Exams

Gol Maal(1979) is my favourite film. I must have seen it several times.

It's directed by Hrishikesh Mukherjee, who was a very interesting person.

Here is how he conceived his film "Anand" (1971): Mukherjee loved Raj Kapoor so much that he was morbidly afraid thinking of Raj Kapoor's death some day. The film is an effort to capture those feelings. Raj Kapoor is played by Rajesh Khanna and Hrishikesh Mukherjee is played by Amitabh Bachchan.

This is one of the most creative idea I have heard for a Hindi film.

'Gol Maal' (and Chhoti Si Baat, 1975), really captured the mood of people like me in the 1970's, early 1980's: bell-bottoms trousers...long hair...a belief that a revolution was round the corner and anger would get us there...good education...no jobs ('the best' job going was that of a clerk at a nationalised bank)...phone was something one saw only in movie...middleclass pretty girls- flaunting nonzero size figures- who got married before they turned even 21...and field hockey as popular as cricket.

A hockey match at Mumbai, between India-Pakistan, plays a major role in the film. It gives birth to the twin brother named 'Lakshmanprasad' of our hero 'Ramprasad'.

India won 1975 hockey world cup that was played between March 1 - March 15 at Merdeka Stadium, Kuala Lumpur, Malaysia. I was supposed to be in the thick of my S S C examination.

Earlier in 1973, I almost died hearing running commentary of India's final against Holland when they gave up their 2-0 lead and lost the cup.

Today, I remember the world cup more vividly than the exam! I heard running commentary of every India match on All India Radio and was panic stricken in the last ten minutes of the final between Indian-Pakistan played on March 15, should India repeated their earlier folly.

Who knew it would be India's last such triumph for decades to come?

Boys, this year my son appears for his S S C exam! Will you do it for him?

"Australian Jamie Dwyer, pictured below, is considered as the most lethal striker in world hockey, but there is something even this 30-year Australian cannot do — win every game 10-0 for coach Ric Charlesworth." (The Asian Age, Feb 23 2010)

Mr. Charlesworth, once we routinely used to! 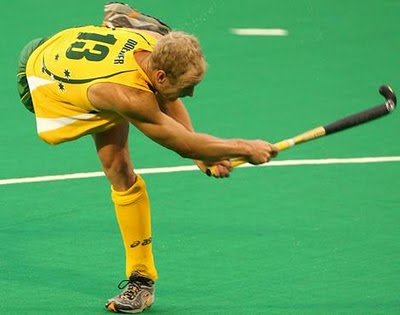 Picture Courtesy: Getty Images
Posted by Aniruddha G. Kulkarni at 9:00 AM No comments: