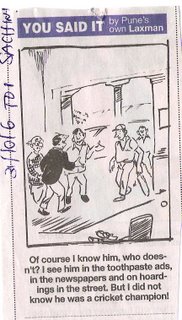 Cricket is a subject this blog will keep returning to.

Tendulkar is a great player technically but he has achieved very little for his teams, especially in test matches, over a period of number of years. That feeling gets very acute if you compare him to Kapil Dev, Sunil Gavaskar and G R Vishwanath.

But for Indian media and publicity industry this matters for little as loads of money is riding Tendulkar. Indian Express was vitriolic when it came to Sunil Gavaskar but the same paper prostrates in front of Sachin Tendulkar as he helps them sell their broadsheet on a weekend and also some airtime when he chats with their editor-in-chief.

But nothings gets past R K Laxman. That discerning voice and paint brush.
Posted by Aniruddha G. Kulkarni at 4:57 PM No comments: 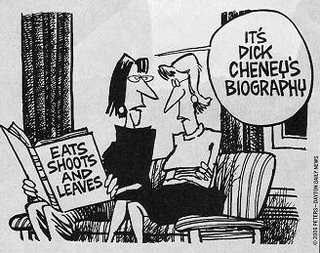 We all know funny (and serious, if you care) book "Eats, Shoots & Leaves" by Lynne Truss.

Who would have thought Dick Cheney would have anything to do with this? George Bush, knowing his being language-challenged, yes, but not Cheney.

Not quite. It seems it also is the title of Cheney's biography because that is what he did on a hunting trip. Didn't he?

p.s note use of 'confusing' apostrophes in speech balloons of the picture: It's vs. Cheney's!
Posted by Aniruddha G. Kulkarni at 4:45 PM No comments:

Eat food twice as much if it has 50% cals 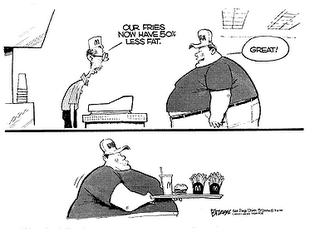 Indian middle-class , US and many other nations are in big trouble. Not on a/c of many other issues but just because of the kind of food they eat.

India may or may not be IT superpower but it surely rules the world in diabetes.

Bill Maher said,“The food that Americans eat. Americans get huge amount of calories, they're malnourished. This is where our illness comes from. And this is Bill Clinton's problem. I mean, people do not realize what is going to kill them. It's the food. I'm telling you. The call is coming from inside the house. It's not going to be (UNINTELLIGIBLE) or monkeypox, West Nile, it is the food. It is not something -- you know, shark attacks, it's the buffalo wings. I wouldn't touch a hot dog unless you put a condom on it. This is what people are not getting about the way we live. That our food is killing us. Food is either poison or medicine.“

A brilliant artist, Steve Breen, sums up the situation well. McDonald has slashed the calorie content by 50% in their ubiquitous French fries. What do we do? We eat twice as much!

A small sidelight. The order taker in the picture is pencil thin. I wonder why almost all of them always are. We of course ignore it when we order.
Posted by Aniruddha G. Kulkarni at 12:55 PM No comments:

statue of liberty as fence

Once America stood for some great things. Liberty was one of them. Americans erected a statue for it.

And now wrapped in national flag, they are finding newer and newer means to stop immigration. Now a great one-liner like "Immigrants made America" may become just that. One liner.
Posted by Aniruddha G. Kulkarni at 12:46 PM No comments: 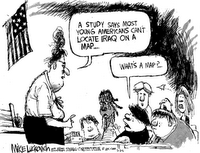 Education is a hot topic in India or elsewhere. India Today ran a story in issue dated Nov 27 2006 how bad our education is getting.

Here is Luckovich's take on school education in US. Being a Spartan, he also throws in "Iraq" to the cauldron to deliver a huge kick.

Look at the innocent expressions on the kid's face asking question.

Like all great art, you feel happy and sad. Don't you?

This is my take on the subject:

"Objective of our education system has now firmly become only money. Sure, money has always been an important objective but hardly the only objective which it now is. Our society at large too has started honoring riches a lot more than it did in the past. To paraphrase W H Auden, we went from being like Europeans ("No European associates wealth with personal merit or poverty with personal failure") into an embrace of USA (" the power to earn money as proof of one’s manhood").

And money comes easy today. There is so much demand created for English speaking youth by BPO, retail, banking and IT industry that you need to have a 'good' degree/diploma but not necessarily good education. Shiv Vishwanathan has summed it up for India Today special millennium issue “… Science today is a creature of market or state. It is seen as the IT of Azim Premji and Chandrababu Naidu without asking how cyberspace and justice can unite. But there is no sense of fun, no invitation to ask why the sky is blue, or why a top spins or why a boomerang moves the way it does. We need to go back to our inventive history and bring science back into the celebration called culture, to create a science as inventive as our music or dance, a science that celebrates 40,000 varieties of rice and ensures they do not become a monoculture of five to 10 species. Next time you read the M G K Menon or the Murli Manohar Joshis or some policy bureaucrat, remember the need for the Mushtaq Alis of science”

I have another worry. We worry only about technical areas of education. What about "soft" skills education?

Gandhiji, Vinoba Bhave विनोबा भावे and Sane Guruji साने गुरुजी, who were great teachers first and foremost, wanted us to focus on softer skills to build tolerant and healthy society. Society free of corruption and communal hatred. Society that is compassionate. Society free of dogma and superstition. Society that respects manual and intellectual work equally.

Here is the first one. Changing of guard at the Buckingham Palace is supposed to be a big deal. But the palace itself is a beleaguered place with all kinds of scandals, especially when the so-called people's princess was around.

This is where Mike's wit moves in. The old lady in the picture has seen changing of guards- horses, lances and all that. But here she is taken to place where guard is caught pants down. And she is confused.

Slap in the face of celebrities in general and British royalty in particular.

I thoroughy enjoyed it when it appeared first and laugh my head off every time I return to it.
Posted by Aniruddha G. Kulkarni at 11:43 AM No comments:

Laugh is like a sneeze or a yawn. Shadowing us all the time but occasionally- like a shadow itself- hard to find. And hence the search!

They always conquered their pain with a big heart and a bigger laugh. Not a moment was dull when they were around.


At the end of it all, one is looking for a reason to laugh. Society which has become smug and arrogant finds it hard to laugh at others and, hopefully and more importantly, at self.


Laugh is like a sneeze or a yawn. Shadowing us all the time but occasionally- like a shadow- hard to find. And hence the search!


But this is not about laugh alone.

"Punctured though night is by lightbulbs,
Someone is pumping darkness;
Though laughter crazed,
tears bark alright."

Inspiration for this came from the late D G Godse (द ग गोडसे), arguably the best visual art critic in the country, who has penned many brilliant commentaries on subjects from paintings in Ajanta to Shaniwar-wada, architecture of Raigad to Mandu and so on.

Shri. M V Dhond (म वा धोंड) taught me the value of versatility in an art critic and importance of following your own instincts.

Vilas Sarang (विलास सारंग), the most under-rated writer/critic in Marathi ever, told: “…..seriousness does not mean solemnity….. Just learn from the poetry of Sadanand Rege (सदानंद रेगे) and Arun Kolatkar (अरुण कोलटकर)”. I am trying.

And my father Gopal Dutt Kulkarni (गोपाळ दत्त कुलकर्णी ) who has been critic of all life and art around him since I heard him first time.

But why bother and express oneself?

Vivekananda: “Let us remember that the civilization of the West has been drawn from the fountain of the Greeks, and that the great idea of Greek civilization is that of expression. In India we think – but unfortunately sometimes we think so deeply that there is no power left for expression. Gradually, therefore, it came to pass that our force of expression did not manifest itself before the world; and what is the result of that? The result is this – we work to hide everything we had. It began first with individuals as a faculty of hiding, and it ended by becoming a national habit of hiding-there is a such a lack of power of expression with us that we are now considered a dead nation. Without expression how can we live? The backbone of Western civilization is expansion and expression”

What is it worth? You decide but let Mardhekar again express himself.

But why blog and not a book perhaps? 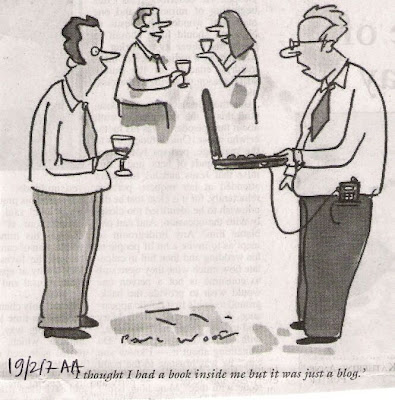