People’s Daily China, mouthpiece for the Communist Party, May 16 2016:

Steven Weinberg, 'Five and a Half Utopias', January 2000:


“…The most influential utopian idea of the nineteenth and twentieth centuries was socialism, which has failed everywhere. Under the banner of socialism Stalin's USSR and Mao's China gave us not utopias but ghastly anti-utopias. It is ironic that in the heyday of utopian thinking, in the nineteenth century, Karl Marx himself sneered at utopian thought, and claimed to be guided instead by a science of history…”


“...By all accounts, during the ten years spanning the Cultural Revolution, between 1.5 and 2 million people were killed, but many more lives were ruined through endless denunciations, false confessions, struggle meetings and persecution campaigns. Anne Thurston has written eloquently that the Cultural Revolution was neither a sudden disaster nor a holocaust, but an extreme situation characterised by loss at many levels, ‘loss of culture and of spiritual values, loss of status and honour, loss of career, loss of dignity’, and, of course, loss of trust and predictability in human relations, as people turned against each other...”


"Photographing torture had hitherto been rare under Mao, but it was done extensively in the Cultural Revolution, especially where Mao’s personal enemies were concerned. As Mao’s usual practice was not to keep records for posterity, let alone proof of torture, the most likely explanation for this departure from his norm is that he took pleasure in viewing pictures of his foes in agony. Film cameras also recorded gruesome denunciation rallies, and Mao watched these displays in his villas. Selected films of this sort were shown on TV, accompanied by the soundtrack of Mme Mao’s “model shows,” and people were organized to watch."


"...Mao himself never wrote a single, comprehensive analysis of what he intended to achieve by the Cultural Revolution, or of how he expected it to proceed. It does seem to have been a case of allowing theory to grow out of practice, as he had always interpreted the revolutionary process to be. Indeed he issued very few statements at all after the fall of 1966, and he did not speak to the masses in any public forums, with the lone exception of a few words he uttered over a microphone fitted to the rostrum on Tiananmen at the seventh mass Red Guards rally in November. The speech in its entirety ran as follows: “Long live comrades! You must let politics take command, go to the masses, and be with the masses. You must conduct the great proletarian Cultural Revolution even better.” Even in the inner circles of Party leaders, where some of his words were transcribed and later circulated, his words and thoughts were far more condensed than they had been earlier...."


"In the minds of its western admirers, Mao's China was a fantasy land, not a real country. Viewed from the safe vantage point of affluent boredom, the spectacle of revolution seems to generate a voyeuristic excitement not unlike that provided by media images of celebrity death. Did the western dignitaries who toured the killing fields really believe that nothing was being hidden from them? Or were they secretly thrilled to be privileged spectators at one of history's greatest experiments in terror? These are questions that cannot be answered, but it may be worth reflecting that China has never aroused more enthusiasm in the west than during the Cultural Revolution, another catastrophic experiment, set in motion by Mao only a few years after the Great Leap Forward, which destroyed millions more lives."

For my taste, the play is verbose and excruciatingly boring. (see my obit of GPD dated October 17 2013 here.)


Mao Zedong reportedly said: “Who are our friends? Who are our enemies? This is the main question of the revolution.”

Mr. Deshpande, in the quote above, is explaining to us that the CR was Mao's antidote to the bureaucratization of the communist movement in China. Perhaps an exercise to identify and eliminate those who were NOT their 'comrades' anymore.

As colorful quotes at the top of the post suggest, we know a lot about what ACTUALLY happened on the ground in China during the CR.

In 1998, Mr. Deshpande could NOT have revised his play but surely his preface to reflect it...but he chose not to!


Also read what Catherine Merridale writes in her much lauded book 'Ivan's War: Life and Death in the Red Army, 1939-1945', 2007:
"...Communist rhetoric may have contributed a certain zeal, but it was not accepted universally. Nor was the god-like status of Stalin. In the 1930s, the leader’s name, in capitals, had appeared in pamphlets, newspapers and posters everywhere that Soviet people looked. His face loomed out of wartime newspapers and pamphlets, too, and his name was spelled out on the painted banners that were strung between birch trees to hallow soldiers’ meeting places in the open air. But it is another matter to read allegiance into Stalin’s ubiquitous presence, least of all among troops at the front line. ‘To be honest about it,’ the poet Yury Belash wrote later, ‘in the trenches the last thing we thought about was Stalin.’..."

The yajnya/ satra was not an ordinary one.

It was a sacrifice being performed to annihilate Mao's countrymen many of whom were his erstwhile comrades (मित्र) but were now perceived being enemies and he indeed was the high priest at the ritual.

Many such 'Satras/ yajnyas' have been performed around the globe since the dawn of civilization, some of the bloodiest ones in 20th century.

"According to the Mahabharata,
a sacrifice performed by Janmejaya
with the object
of annihilating the Nagas,
or the Snake People." 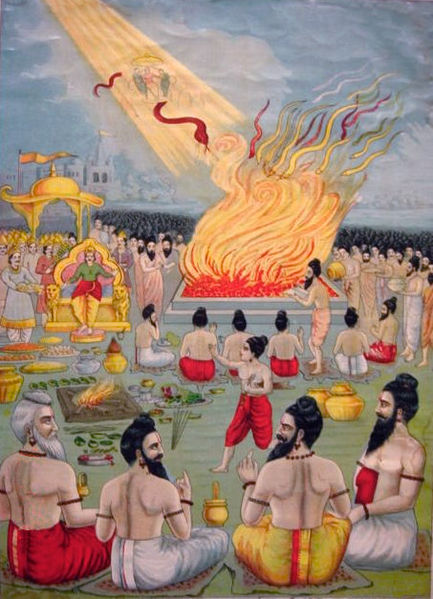 
By the way, I have NEVER read GPD's condemnation of the people responsible for colossal human tragedies- rivaling two genocidal world wars-  that happened in Russia and China, from 1917 to 1976, in the name of revolution and communism.

If you have, please let me know.

2> I have already shared, probably on this blog, a feeling of general hatred of China, in the society, including kids, after India’s defeat at her hand in 1962 war. People (even kids) always talked about Chinese betrayal and the chief culprit of that was, they said, Zhou Enlai, of ‘Hindi Chini Bhai Bhai’ fame. 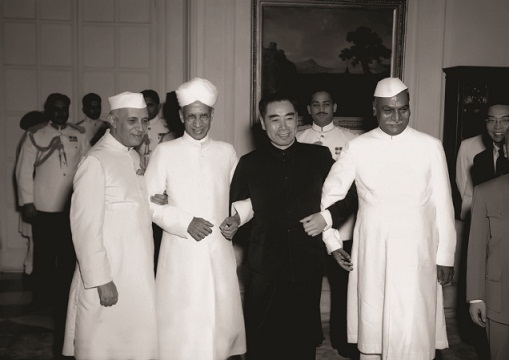 Considering the ‘villainy’ of Zhou Enlai, I wonder if the following was ever widely reported:
“Some of the most fascinating material involves Zhou Enlai, the longtime prime minister, who comes across as a complete toady of Mao, even though Mao tormented him by forcing him to make self-criticisms and by seating him in third-rate seats during meetings. In the mid-1970's, Zhou was suffering from cancer and yet Mao refused to allow him to get treatment - wanting Zhou to be the one to die first. "Operations are ruled out for now" for Zhou, Mao declared on May 9, 1974. "Absolutely no room for argument." And so, sure enough, Zhou died in early 1976, and Mao in September that year.”
(Nicholas D. Kristof, review of Jung Chang and Jon Halliday’s book ‘Mao: The Unknown Story’, 2005)
I am sure it would have given some pleasure to a lot of people. 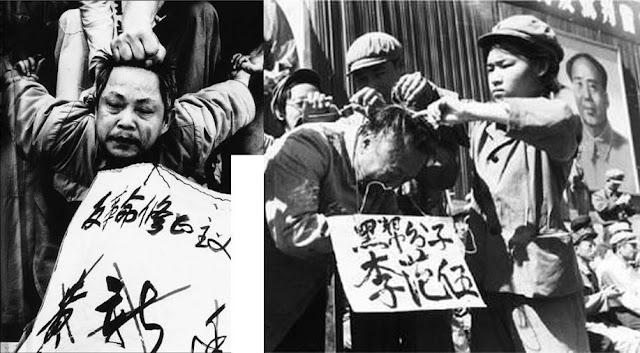 Everyday scenes in the Cultural Revolution. The “jet-plane” position (left), and brutal hair-cutting, always under a picture of Mao.

3> But such widespread misery occasionally gives birth to something beautiful.

During the Cultural Revolution millions of urban people were sent to the countryside. One of them was the father of fictional character Sunflower who has been sent there to do hard labor. Sunflower's friendship with a boy named Bronze, who is unable to speak, is the subject of Cao Wenxuan's award winning book 'Bronze And Sunflower'. 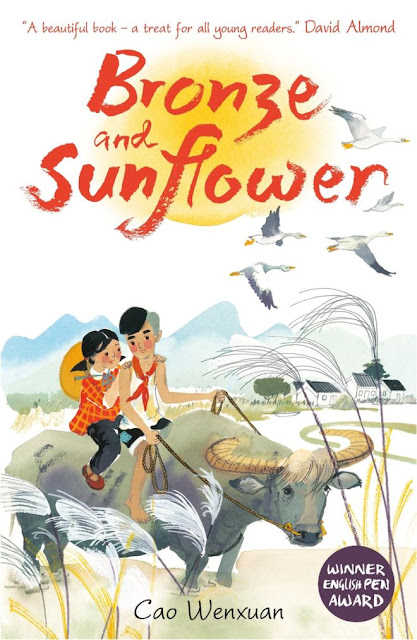 illustrated by Meilo So
Image courtesy:  Walker Books
Posted by Aniruddha G. Kulkarni at 9:00 AM No comments: Links to this post